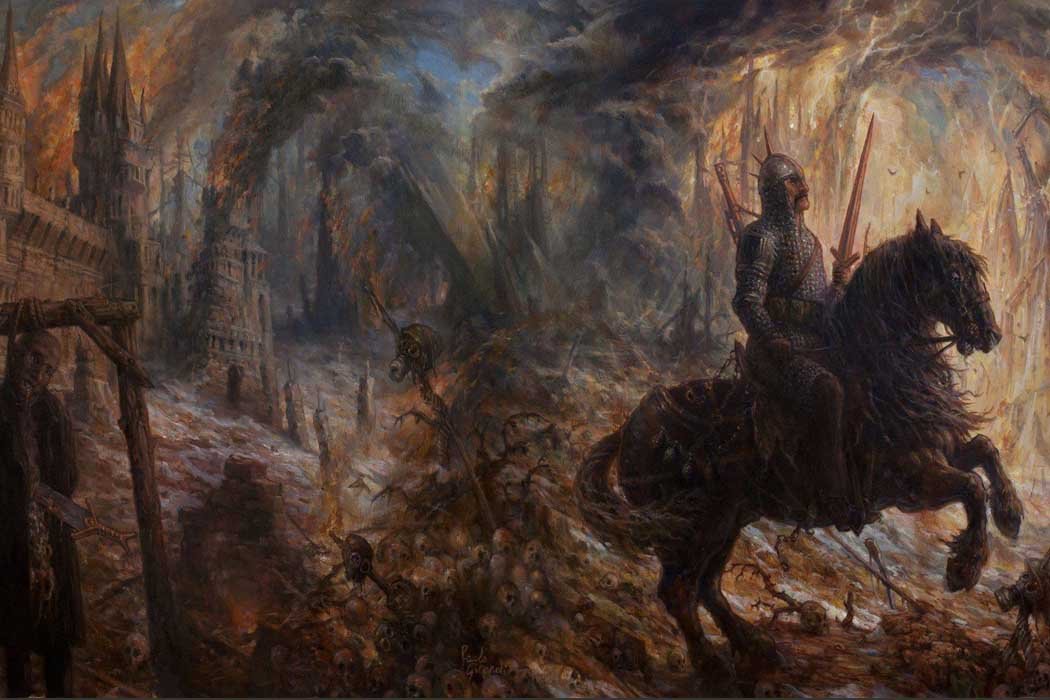 It has been an absolute pleasure to witness Diocletian increase in intensity and skill over this last decade. Never ones to sacrifice speed and order for outright brutality, Diocletian have always been methodical in their approach to extreme metal. Each riff, groove, and transition meticulously crafted. Master musicians of precision and the steadfast assertion that instrumental prowess trumps ideological or atmospheric cliche. This is war metal. Fast. Explicit. Unrelenting. No hostages. No mercy.

In the four years since War of All Against All, Diocletian have released one (long overdue) compilation, a split, and a live recording that sounds as rigorous and tight as any studio effort. (What other war/bestial death band has the chops to have put out a live recording? Black Witchery comes to mind — but sounds nowhere near as proficient.) Now arrives Gesundrian. The name derives from the same Anglo-Saxon root word that gave us the modern day verb ‘to sunder’, to split apart. The act of sundering begins with Cleaved Asunder, a war-march that gathers momentum over a din of clashing steel and bone. It is the slowest and most atmospheric piece on the album, replete with lyrics that speak of apocalypse and cosmic annihilation.

Cleaved asunder by the scimitar of titans… Celestial bodies disassembled piece by piece, super massive black holes engulfing time, chain reactions of super novae… The universe untangled, disintegration, Galaxies like dominos collapse… Whom begat creation it shall now be undone, in the eternal depths of this silent darkness

What follows is half an hour of irreproachable extreme metal. Diocletian are on the bleeding edge (or should I say sundered edge?) of extreme metal in 2014. Their instrumental dexterity never eclipses their ability to deliver varied and engaging compositions. Gesundrian is rich with wicked riffs. From the bass-driven gauntlet that is Steel Jaws, to the groove-laden assault of Traitor’s Gallow, through the melodic inclination of Wolf Against Serpent (is that a little Swe-death influence seeping through?!), Gesundrian successfully avoids the tunnel vision of other technically ambitious acts. It’s not that Diocletian are bringing anything new to extreme metal — there’s nothing progressive or experimental about Gesundrian. It’s just faster, fiercer, stronger.

War and bestial metal have lost their standing as the supreme embodiment of barbarism and savagery on tape. Passing off a wall of noise and a slightly off-sync drummer as the primeval ideal just won’t cut it anymore. So while Teitanblood’s influence is spawning clones the world over, hellbent on reclaiming the reptile-brain as their own, Diocletian’s throne remains usurper-free. Nobody is playing war metal as fast, as accurate, or as devastating.