“The ear, the organ of fear, could have evolved as greatly as it has only in the night and twilight of obscure caves and woods, in accordance with the mode of life in the age of timidity, that is to say the longest human age there has ever been: in bright daylight the ear is less necessary. That is how music acquired the character of an art of night and twilight.” 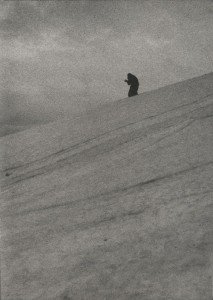 Sitting down to any Paysage d’hiver demo can be an incredibly rewarding experience. The demo in point – Nacht – is representative of Wintherr’s larger catalogue as a whole. Winter at night, swallowed by windswept pines, the biting chill of a monotonous, howling wind in the middle of an opaque snowstorm. To remove almost all subjectivity and embodiment from a piece of art, to have such strong a vision as to provoke an atmosphere of complete and utter isolation within the kernel of nature and to deliver this vision with the conviction and honesty of a knowing artist, that is Paysage d’Hiver. ‘Nacht’ is the experiences of the hermit recluse, living, hunting, breathing, outliving the brutality of mother nature.

Opener ‘Des Lichtes Sterben – Part I’ obombrates a placid calm, despite sampling shrieking wind at twilight and fades slowly into the ambient gift of reverberations from caverns, valleys and dew-covered pine trees. A totally ambient introduction that does well to set the tone for the remaining sounds. ‘Ein Getriebener Im Schneestreiben’ brings greater instrumentation as guitars fuzz and flourish into gloriously epic riffs, drums cascade through snowfall and the moonlit travels of some half insane wanderer and vocals never quite break through the blizzard. As the track develops through some absolutely mind blowing tempo changes and chord alterations, the atmosphere and magnanimaty of the whole album begin to sink in. Repitition provokes the feeling of isolation, fuzzy production values put the bite into the shriek of the wind as snow and ice tear at the skin. Suddenly an epic vista opens up before you. A whole simulacrum of mountains and impenetrable foliage, snow storm and horizontal pines caught in the fray. Here, alone, the sublime immensity of insignificance strikes its most resolute arrow through the heart. 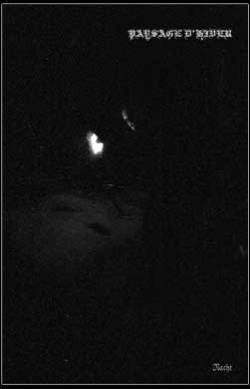 The latter half of the demo, beginning with ‘Finsternis, Tod und Einsamkeit’, is another excellent example of Wintherr’s talent. Everything is present here, haunting arpeggio’d distortions over hermetic visions, the unpiercable veil of night and snow an unwelcome danger. Its hard to analyse individual parts to a piece so caught up on delivering the whole. Wintherr is an artist in the true sense of the word, his visions as brutal as his implementation. Everything perishes in winter. Your lungs are broken and sputtering icey spittle. The piece turns dreamlike before floating back into reality.

And then, the eternal return: ‘Des Lichtes Sterben – Part II’ brings another day, another storm and another fight to survive. The undivided certainty that nature will not assure your survival, the realisation that attempting to dwell and survive here is idiotic. Paysage d’hiver is great Black Metal because it doesn’t preach about things you should be frightened of or indeed try to frighten you itself with lazily conceived shock tactics. Instead, it has a firm understanding of the sublime and the tragic, of human emotion, the need to overcome and survive and is delivered as some of the most boundlessly intuitively compelling music ever put to tape. Quite simply, if you are into Black Metal and you don’t appreciate this recording – you have no idea what you’re on about.