Recently another bizarre black metal movement has managed to pique my interest. In an extreme ideological contrast to my last music related post which you can view here, this particular scene has adopted the title of ‘Red and Anarchist Black Metal’ or RABM as the usual coloquial formula dictates.

The name is an allusion to RASH (Red and Anarchist Skinheads), a left-wing skinhead group who formed in response to the murder of a homosexual man in New York by a gang of right-wing but supposedly anti-rascist skinheads (Thanks Wikipedia). The transition of these values into modern black metal seems to be a direct protest against a genre which is apparently rife with ‘racism, nationalism and worship of authoritarian rule‘ to quote Antoine of self-proclaimed communist black metal band Jarost Marksa.

THIS JUST IN: It’s actually not, as all the most revered black metal luminaries will tell you in a heartbeat if only people would listen.

Now, I couldn’t give two shits about politics in my music as long as I can hear sincere, rabid artistic passion behind it all. That is why I have no problem listening to NSBM and why I care equally as little about the addition of HURR DURR RED AND ANARCHIST on to my beloved black metal. My general apathy towards humanity prevents me from forming an opinion on how the scum of the earth should have their lives governed by other scum of the earth. However, enough of the rambling. My next post will be free of any of this bullshit, I promise. 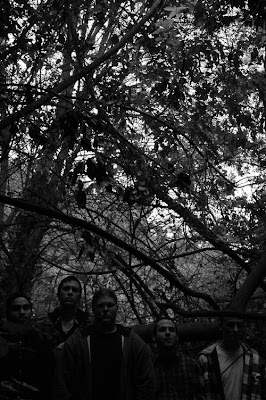 On the subject of sincere and rabid artistic passion, SoCal’s Lake of Blood have this in abundance. I came across the band after hearing them on a split release with fellow RABM crusader Panopticon (who is also worth your time) so I got hold of their 2008 debut EP, Heed the Primal Calling. On the first spin, it soon became apparent that this is nothing but brilliant, balls-to-the-wall melodic black metal. It’s full to the brim with an epic atmosphere that will seize your head and send it nodding with vigour. Always welcome.

Musically, it sounds like the beautiful lovechild of the early Ulver releases, Bergtatt and Nattens Madrigal, albeit with a far more modern edge that conjures comparisons with Weakling and Wolves In The Throne Room in places. There is also the pleasant addition of a thrash metal/melodic death metal feeling to some of the riffs, most evident on the EP’s title track and Lake of Blood. Acoustic folk passages make themselves known out of the cacophony with a fair frequency, again suggesting Ulver’s older works. The lyrics are standard black metal territory as far as I’m concerned; a deep respect for nature, wilderness, isolation and the wholly detrimental effect the progress of humanity has had on our unfortunate planet.

On the surface level, Lake of Blood have nothing to do with the RABM jargon that they have been lumped in with, unless it’s simply a political statement that they agree with, though not obviously referred to within their music. I do hope that this isn’t limiting to their musical career because for a young band this is a strong debut release. They could certainly be one to keep your eyes and ears on in the near future.

‘Out of the darkest night, playing the blackest of metal.’

1. Nameless I Arise
2. Heed The Primal Calling
3. The Darkest Path
4. Lake of Blood