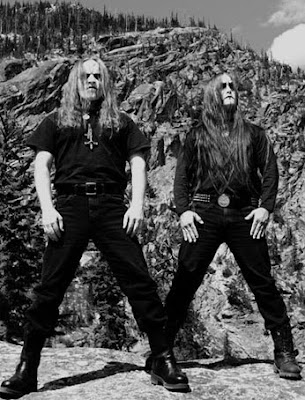 The record lable espouses ‘NO COLOURS’. This rings true save for the smattering of blood red across an album cover that looks as if it could have been lifted straight from a catalogue of Wrest’s tatoos. Musically, only the shades of black are invoked. If there is another hue it is only that same blood dripping upon the altar of the occult. Inquisition’s last recorded album is their self-proclaimed ‘1000% metal’ release and this is true to the nth degree, understandable though seeing as black metal has been a extreme vartiation on prior heavy metal subgenres since its dawning in the late ’80s.

Power chords sprawl and meander all over the guitar neck with seemingly little effort on behalf of the musicians, at a speed that betrays Inquisition’s origins as a thrash metal act. The vocals are stunning in their original sound, droning and ululating in a highly ritualistic manner. Due to a large recent intake of H.P. Lovecraft, I thought a good metaphor would be to liken them to ‘a priest of Dagon reciting eldritch rites’… or something to that effect. After a quick glance at Inquisition’s metal archives page however, I recalled that the guitarist/bassist/vocalist’s stage name is indeed Dagon anyway, so… that’s cool.

This is a really great record, though Inquisition’s earlier releases also come highly recommended. >Nefarious Dismal Orations seems to be a more straight-forward and aggressive take on their sound, straight-up top tier American Black Metal from the darkest depths of Colorado. As a good friend of mine, Bestie from Mother Dirt, told me once; ‘This album never fails to make me frown’. Awesome. 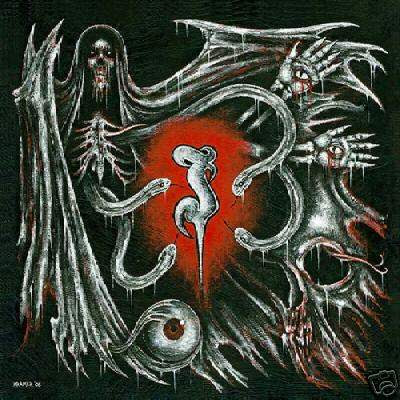 3. Strike of the Morning Star

4. Through the infinite Sphere our Majesty shall rise

6. Where Darkness is Lord and Death the Beginning

9. Before the Symbol of Satan we vow and praise