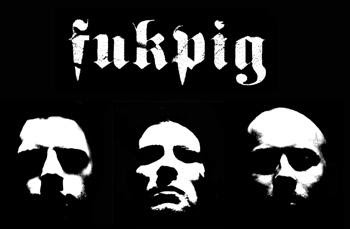 Inventing your own genre and naming a song after it is a step in the right direction. I mean, Venom did it with Black Metal and just look where that went. The ‘genre’ in question is ‘Necropunk’. The band: Fukpig. Fukpig are made up of three members from Birmingham’s second favourite grindcore bastards, Mistress. The first being Napalm Death of course. One of those is also multi-instrumentalist Mick Kenney of Anaal Nathrakh. So I already hear you asking, ‘what the fukpig does Necropunk sound like?’ Your answer: Heavy and fast.

Fukpig take equal influence from the forceful speed of grindcore and mix it up with the non-stop d-beat blast of Crust Punk. Kenney’s time under the Anaal Nathrakh moniker has also left a very tasteful black metal residue across the fold, culminating in this inescapably filthy sound that is Necropunk.

It’s the album’s opening that grabbed me, slapped me around the face a couple of times and left me begging for a further brutalising. The first track, The Horror Is Here, starts with a synth choir drenched in fuzz, sounding not unlike the samples that kick off Satyricon’s Dark Medieval Times. But then a bowel-loosening, drop tuned power chord enters the fray and we all know where it goes from here. A relentless d-beat pays homage to a long list of British crust and hardcore bands like Discharge, Amebix et al. played at the breakneck speed of grindcore. The riffs remain minimal consisting of only four or five chords to a song, but it’s to great effect, staying true to a time where grindcore, hardcore punk and thrash metal were almost indistinguishable from eachother.

On to the next song then. Oh, it sounds pretty much the same as the one before. This is a trend within the record and perhaps its greatest downfall. But at no point do Fukpig pretend to be anything else than what they are: Three dudes wanting to make horrible, horrible noise. There’s not one section of respite throughout the work. Half a second separates each track, then it continues; same tempo, same beat, same key. This is Necropunk, take it or leave it. 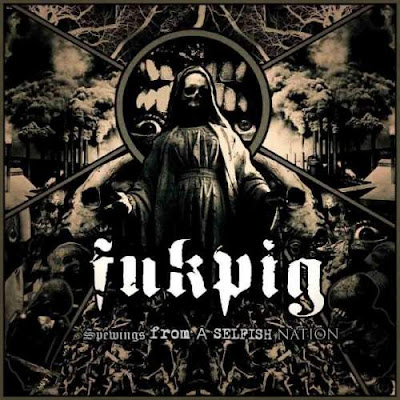