As if Live Evil wasn’t enough this year in the UK, there are a ton of great looking festivals spreading across the world this summer. Europe seems to have got the lion’s share with the strongest looking roster. Under The Black Sun, Hole In The Sky and Hammer Open Air Metal Festival all boast cult favourites like Venom, Watain, Obituary, Urfaust, Angantyr or Mortifera. Take your pick, a festival near you is probably putting them on. America steps up to the plate this year with the Northwestern Black Circle Festival. Though only the second event of its kind, the festival has managed to swag quite an impressive line-up. Who wouldn’t see Inquisition headline? And of course the dark horse of the batch, the Gathering of Shadows. An invite only event in the forests of the Rocky Mountains, with the sole purpose of transcending entertainment in the live setting. 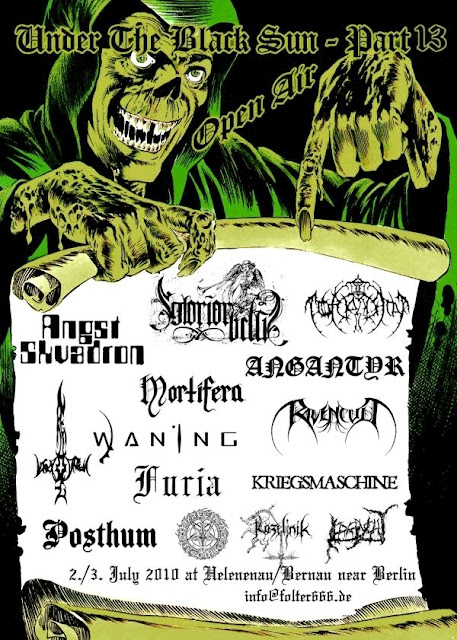 After 12 years of quality bands gracing this German festival’s stage, Under The Black Sun continues to strive for brilliant and diverse line-ups. A few of my favourites from past and present are proving enough reason for me to want to go. Denmark’s finest, Angantyr are set to play as well as Noctu and Neige’s Mortifera, the act that heavily influenced Neige’s direction thereon. Poland is well represented with a couple of great bands, the furious Kriegsmachine featuring members of Mgla and the challenging Furia. But this is just for starters… 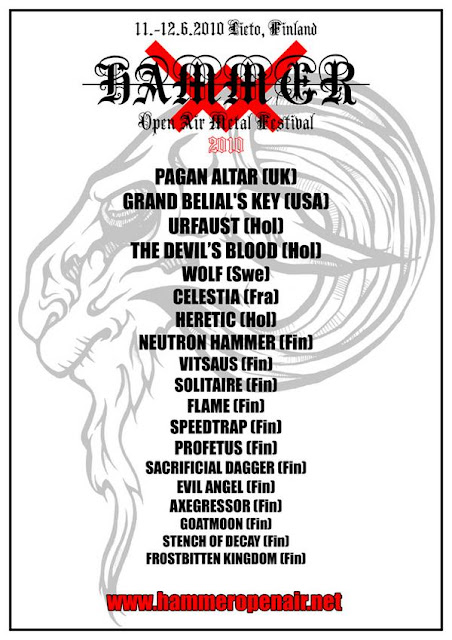 Finland’s Hammer Open Air fest are newcomers to the game, but fresh-faced and determined they’ve built a sturdy line-up this year. This is my second favourite offering from Europe but to be honest, I’ll go wherever Urfaust go. Other highlights include England’s doom metal grandad’s, Pagan Altar, occult rock from The Devil’s Blood and godfathers of quality USBM, Grand Belial’s Key. If all goes to plan this year Hammer Open Air is definitely a festival to watch in the future. 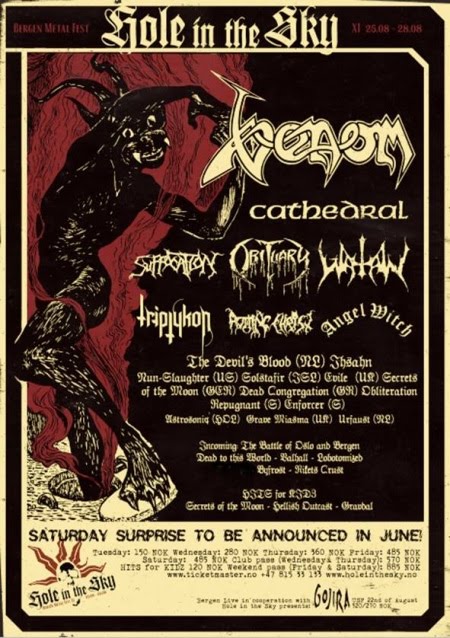 The big guns are coming out now. Bergen’s Hole In The Sky was the first annual festival in Norway. The event was established in 1999 as a tribute to Erik Brødreskifts (Gorgoroth, Immortal, Borknagar) who died that same year. All profits from ticket sales have since gone into the Erik Brødreskifts Memorial Fund, a foundation focussed on the promotion of heavy metal related activities in Bergen. So at least you know your money is going to a good place. The line-up is unrivaled and varied; Venom, Cathedral, Suffocation, Watain, Secrets of the Moon and Obituary to reel off the big names. But if you strain your eyes and look closer, Urfaust are once again on the bill. As are England’s unsung heroes of blackened death metal, Grave Miasma. I envy you Norsemen! 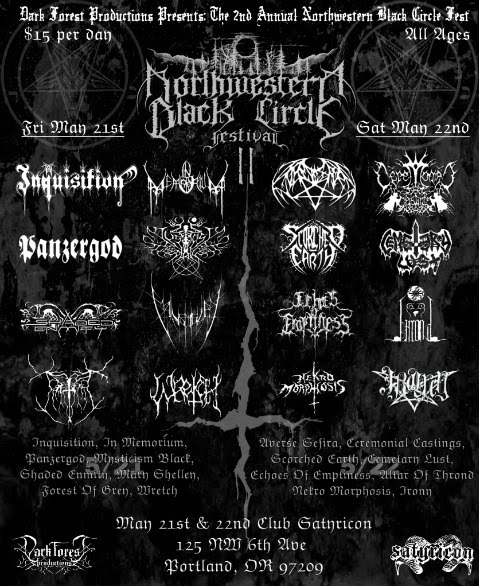 Oregon’s Dark Forest Productions are keeping it low key with an underground selection of bands from the Northwestern region. I’m unfamiliar with a majority of the acts but I’d relish the chance to be introduced in the live habitat. Inquisition on the other hand are one of those special bands with an inimitable sound and vision. If you’re in the area, at least go for them. Averse Sefira are also headlining and while I’ve seen them live and have one of their records, they’re slightly lacklustre in the face of what else the festival circuit has to offer. The Northwestern Black Circle is THIS FRIDAY so sort some tickets out.

The one that everyone knows about but have never been to, the Gathering of Shadows is now in its 7th successful year. The formula remains unchanged: no profits, no tickets, no money. Just black metal offered under the night sky of the Rocky Mountains. The bands travel at their own expense to perform here making it a privilege to attend. Any form of ‘business’ is totally eradicated so that the music to speak for itself, unhindered in the inspiring surroundings. I’d love to go to this, but with it so far away it would have to be an expedition of military precision. The line-up is brilliant as always: Nightbringer lead the way as their members organise the Gathering of Shadows each year. And if Apocalypse Sun is anything to go by, you want to be at this show. The brutal and uncompromising Nazxul are making the exhausting trip from Australia and the esoteric Black Seas of Infinity will also be performing. The main problem with the event is securing that elusive invitation. Undoubtedly rife with elitism, this is the one ‘festival’ most regular black metal fans will never lay eyes upon.


There are bound to be far more festivals on this year. If there’s one going on near you that I haven’t mentioned, please tell us about it. I’m also open to receiving reviews that we can post if readers are planning on heading to any of the above? I’m essentially limited to Live Evil and would love to hear about the others.