Morning all. Well now – first post on Lurker’s Path for me, so I thought I’d ease into it by offering up some local flavour in the form of this beautifully packaged new release from Dublin based drone/noise duo CLOUDEATER 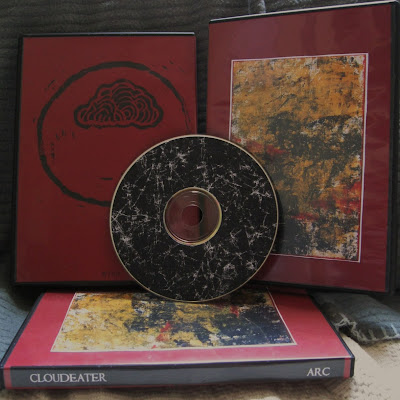 “Arc”, the follow up to the band’s now sold out self titled cdr from April this year consists of three lengthy pieces: “The Light Rises & Falls”, “Within The Arc” and “The Hanging Sun Suspended Full On The White Wall”. A trance inducing voyage into utter desolation, the duo’s jagged guitar based drones are augmented with manipulated bells, voice and percussion. The raw recording compliments their sound perfectly, and creates an atmosphere of dread and despair that makes their work a compelling listen. It’s the sound of being caught in the eye of a storm.

As with the previous release, this is limited so it’s not to be slept on: contact the guys ASAP if you want to get your hands on this via thenoise000@gmail.com. The band have a couple of other things in the works shortly, chief of which is a contribution to Idrone Park’s forthcoming “Demons in the Architecture” 4 cassette compilation