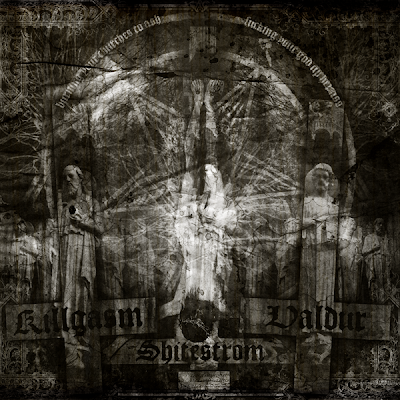 This split was spewed forth from the vaults of ChristHammer Records last month and displays some ferocious underground black metal spirit from three promising American bands; Killgasm, Shitestrom and Valdur.

California’s Killgasm steamroll the proceedings with tongues planted firmly in cheek for their brand of offensive and trashy blackened grind. Opener Shit On Her Corpse is an enjoyable enough slice of above par grindcore but is slightly marred by the fact that Killgasm’s sound doesn’t exactly compliment that of the other two bands. Not that they’d give a shit though. The frontline assault shifts directive for Venomous Ejaculation into the worship of all things Darkthrone but the unstoppable grind influence in the drums gives a slightly different angle for this tried and tested formula. The final track from Killgasm’s quarter, Baseball Bat Lobotomy swings from black metal melodies into thoroughly death metal passages, utilising beefy and rhythmic power chords as much as stock tremolo lines and blast beasts. This is nothing incredibly inventive or revolutionary but since Killgasm’s onus is focussed on “Destroying Christians and posers since 2002” I can let that slide. They’ve thrown a couple of cheeky samples in that always go so well with grind-orientated music and never fail to elicit a small grin. Enjoyable.

Shitestrom take over with a decidedly purer approach to black metal. Fuzzed out guitars bury the drums in swampy textures with distorted vocals that unavoidably remind of Leviathan. The vocals in particular really push the music forwards and put a narrative frame around each song, ranging from putrid and sickened shrieks to commanding bellows. Over the two tracks, The Black Rot That Consumes Unearthly Flesh and The Final Plague, riffs are kept simplistic and driving, sometimes diving into short and abyssal ambient respites. The latter of the two presents plenty of opportunities for headbanging with tight tremolo picking and dynamic minor chord riffing, alongside some jarring bass-led sections. If only Shitestrom’s sound was as harsh and up front as their name suggested, with damp production techniques highlighting their only downfall. Expect better things to come from this Pennsylvanian horde.

Valdur are without doubt the most accomplished of the three, unsurprising seeing as the band’s second self-funded album, Raven God Amongst Us will be released on July 9th through BloodyMountain Records. Valdur wield a harsh and frostbitten sound not unlike that of Russia’s Old Wainds, a welcome comparison for myself. On Beserrker, a roaring guitar tone takes centre stage while organic drums blast underneath at an inhuman rate, leading the listener through a number of frozen wasteland vistas. Thor’s Hammer rumbles along like a roll of thunder itself, powered by dirty palm-muted guitars bolstered by a wall of adept double-bass kicks. A genuinely epic and inspiring example of mid to fast-paced raw black metal from Mammoth Lakes, California, I look forward to more from Valdur.
Gnarly split. Order via the Shitestrom bigcartel page or give it a listen here (direct from band).
black metalgrindcore