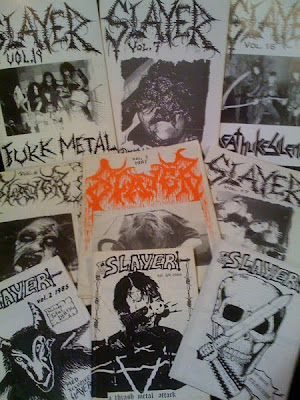 News that Jon ‘Metalion’ Kristiansen was working on a definitive compilation of all the best bits from Slayer fanzine’s illustrious 25 year history originally surfaced at the end of 2008, but with an imminent release date for Autumn 2010 through heavy as hell publishers, Bazillion Points, it only seems fair to spread the gospel further.

Acclaimed by many as the greatest fanzine yet, this collection will feature rare material from the moth-bitten Slayer archives alongside unseen interviews and personal photography of Metalion’s. Slayer set the bar for all subsequent metal fanzines and continues to do so; no doubt this will be a brilliant and enlightening read when it finally hits.
“The legendary Slayer zine gets its long overdue anthology” – Decibel
“Best idea since sliced bread.” – Fenriz
“Founded in 1985 in Sarpsborg, Norway, Slayer Mag quickly rose to prominence by championing countless unsigned death metal pioneers. The pages of Slayer Mag became a written gospel for the fledgling extreme metal underground, combining eye-ripping graphics, brutally honest writing, and a relentless and sick sense of humor. As black metal rose to prominence in Norway in the 1990s, Slayer Mag remained the final word on the moods and motivations of those dark times. In addition to rare archival material unseen in decades, the book will include unreleased and exclusive interviews and artwork, including historical photographs, and never-before-seen portrait photography by editor Jon ‘Metalion’ Kristiansen.”
See more of what Bazillion Points has to offer this year here.
black metalliterature