Anyone tired of the current old school reprise in death metal yet? No? Me neither, and I don’t think I will tire of it, period. Death metal had reached a point where its emphasis on technical wizardry and a glossy, approachable faćade had well passed its sell-by date. Seriously, thank fuck bands like Teitanblood have come to the fore and baptised a whole new generation in the ugly and brutal workings of how death metal should be. The old school is ‘cool’ once more, dragging a terrifying army of new bands out from death metal’s audial grave.

Antediluvian’s third demo is slightly antediluvian itself (unleashed back in 2008) but has been making waves recently. The band hails from Edmonton, Canada, lending itself to the already extensive list of incredible black/death metal bands that have spawned in that area. While many of these were relatively straight forward in approach, Antediluvian is a totally twisted and decrepit beast that focuses the chaotic lashings of Portal into a condensed and lethal concoction. Earlier demos leaned more in the black metal direction but Under Wing of Asael takes the pummelling low-end of those releases and builds on it endlessly.

Under Wing of Asael’s raw, DIY production enhances the delivery of Antediluvian’s bestial onslaught. Guitars are reduced to ground-shaking rumbles, the bass literally melts through the speakers and drums blast a rocky road between impeccable tightness and total incoherence. The great thing about this band is that they are equal parts brilliant riffing and complete fucking destruction. Comparisons to Portal are perhaps overstated; Antediluvian flings riffs at the listener that are sometimes entirely absent in Portal, the latter being more of a lesson in sheer nightmarish terror than something you can bang your head to. 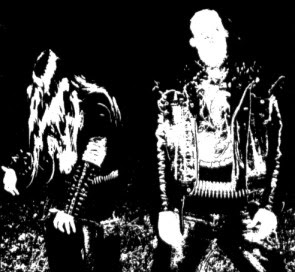 Over four tracks Antediluvian punishes with grotesque yet engaging passages, rumbling through intricate and bass-heavy riffs at a standard black metal pace, only to dive head-first into doomier sections positively dripping with a primordial sludge. The dynamism displayed throughout culminates in the lengthy title-track closer, the occult atmosphere of which is illustrated perfectly by slow and mournful picking that suggests a small but irresistable funeral doom influence.

For any following the old school death metal resurgence with ears strained, Antediluvian are a must. The success of these bands lies in their ability to make endless nods to death metal’s troubled infancy while bringing a whole new level of originality and experimentation possible only in the wake of modern metal’s balls-to-the-wall extremity. Hit up Poison Mist Propaganda to get your hands on some releases. Pretty sure this particular demo is physically unobtainable but easy to find in the blogosphere.