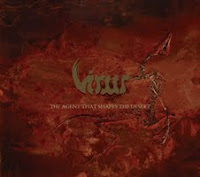 The increased hand fans have in new releases from the underground can only be a good thing. We only need to direct you to the Extra Life, Tartar Lamb and maudlin of the Well releases to prove that this could well be the future of the independent record industry. You hand over your hard earned wad, your favourite band releases a phenomenal record and you are credited and/or rewarded for the role you play. Norway’s Virus are the latest in a recent line of bands who are adopting this cunning and intuitive technique to get the music that they need to churn out to the fans that matter. If 2008’s The Black Flux is anything to go by, you will end up wanting to purchase the new LP, The Agent That Shapes The Desert, anyway. Featuring members of Ved Buens Ende and Aura Noir, expect nothing but quality. Here’s the announcement from the Virus myspace:

“As previously announced on Myspace, Virus have parted ways with Season Of Mist and will take care of the release of our third album ourselves. We are just about to start mixing the album and are looking at a late (preferrably November) 2010 release.
However, since we no longer have a label contributing to the studio costs (SOM covered some, but not all, of the studio costs of The Black Flux), we have decided to let you, our fans be “a part” of completing this album.
As of now, you can preorder the upcoming album The Agent That Shapes The Desert on vinyl, cd and as a special “fan package” including a cd, a signed and handnumbered lp, a limited ep and a t-shirt. We have not set a release date in stone yet, due to the simple fact that it all depends on economy. The more preorders we get, the quicker we will be able to complete and print the album.
This release will be a co-release between Virulent Music (our own label) and Duplicate Records (Einz’ label) which will help with distribution and promotion. This means we basically do everything ourselves, with only some studio support from a few trust funds. We basically have to cover everything else (additional studio time, mastering, printing and promoting the album) ourselves.
Thus, we hope as many of you will grab this opportunity to become our “benefactors” so to speak, and order the cd, the vinyl or the special package. More details on the product follows below.
Trust us, this is the album of our careers. Thanks for your support!”
Einz & Czral
Warriors of the void, get on it by emailing dplctrecords@gmail.com.
avant-gardeexperimentalprogressive rock