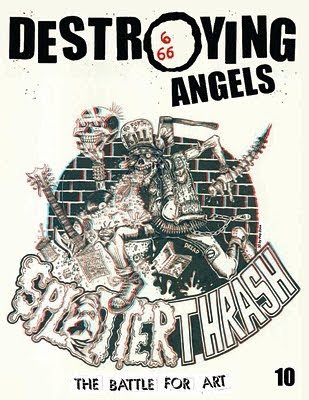 I suppose even a casual lurker ov Lurker would be aware of our obsession for stirring visual art, whether it’s the majestic winter landscapes of Ivan Shishkin or the occult etchings of Lurker logo designer, Black Uroborus. But when that artwork is directly tied to heavy fucking metal it’s even better. The Destroying Angels magazine has long promoted and supported “the invisible empire” of renegade metal artists since its inception in 1998, led by the prodigious ball-point artist Dennis Dread. Patched together in an old school cut-n-paste style from cuttings mailed by one artist to another, it’s entirely a labour of love.

Issue 10 has just been made available and features a 3D cover and back, as well as an awesome roster of interviews and artwork from the Bathory goat creator Joseph A. Smith, French cartoonist Nagawika, 3D artist Ray Zone and underground comic illustrator Jim Osbourne just to name a few. Orders within the USA go for $12, $16 for outside. Steep I know but totally worth it, obviously Mr Dread puts a hell of a lot of time into this project for little to no return.