Tom G. Warrior’s Triptykon are set to release a new EP next month as a companion piece to their popular debut, Eparistera Daimones. Shatter will feature three unreleased songs and two live covers of the Celtic Frost classics ‘Circle of the Tyrants’ and ‘Dethroned Emperor’, with a guest appearance from Mr Nocturno Culto on the latter. Magic. 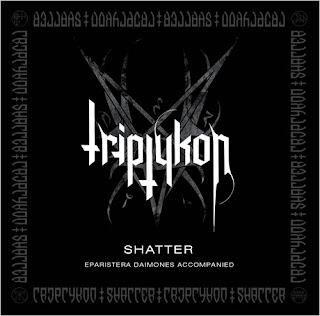 Triptykon’s “Shatter” EP will be available through Century Media Records (under license from Prowling Death Records Ltd.) as CD, digital download, and 12″ vinyl (at 33 1/3 rpm). The EP will further contain the lyrics to all songs as well as detailed liner notes and credits. (From the band’s myspace).

Shatter is out on 25 September in Europe and a day later in North America. Meanwhile, the band will continue their tour of Europe and the States (dates here)