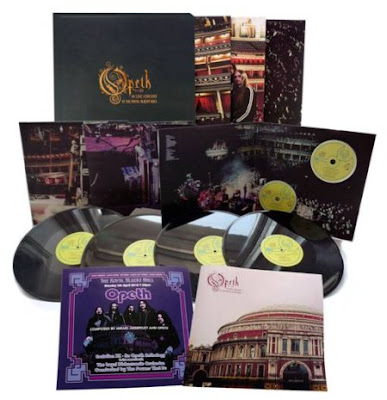 DO WANT. I’m not sure my colleagues can share my enthusiasm when it comes to Opeth but I’ve loved them with the force of a thousand undying white hot suns since I was about 14. Always the band of choice for extended car journeys, Opeth have been together for 20 years now (can you believe it?) and have not once released a duff album.
To celebrate this special anniversary, the band are releasing both footage and audio of their recent appearance at London’s Royal Albert Hall, which includes Blackwater Park in its entirety and a chronological arrangement of Opeth’s finest moments. The limited edition 4xLP includes a shitload for fans like me:
– Double-DVD set of OPETH’s performance at the legendary Royal Albert Hall in its entirety. Bonus features include an exclusive interview and the behind-the-scenes documentary, “On Tour with Opeth”. DVDs are in 5.1 Dolby surround sound, produced and mixed by Jens Bogren.
– A set of four 180-gram LPs of the concert’s live audio in its entirety. The vinyl is pressed overseas to the highest of standards and housed in white poly lined inner sleeves which are packaged as two double gatefold set with exclusive artwork. Vinyl only available in this box set.
– Exclusive, numbered lithograph with artwork designed by Mikael Åkerfeldt and longtime OPETH designer Travis Smith.
– 20-page, LP sized booklet printed on coated paper stock that chronicles the night’s events in photos.
– MP3 download of live audio in its entirety sent via e-mail on release day.
– Expanded, exclusive artwork and more.
Birthday present?
death metalprogressive metal