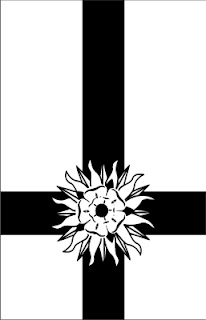 I know this has been out for a few months now, but it’s such a stunning piece of work that it still deserves to be talked about. Agbrigg Beast is easily the best demo I’ve come across this year, and despite its relatively short running-time of 20 minutes, has hours of listening value.

The release marks a huge change in tack for White Medal, who previously had peddled an intense and fuzzed-out brand of raw BM. The old wall-of-sound approach seemed a natural alterego for George Proctor’s power electronics project, Mutant Ape; but on Abrigg Beast, all this has gone out the window. The distorted, Wrest-meets-Culto vocals and the grainy production still gives away the project’s Black Metal foundation, but pretty much everything else about the demo defies comparison within the genre. There are no blastbeats on show here: instead, songs are propelled by driving punk beats that lurch at the drop of a hat into crawling mid-paced rhythms. The guitars share the punkish flavour, and, though only ever partly distorted, have a real force to them. The chord progressions aren’t your usual BM fare, and there’s even the odd foray into a major key (on ‘The Last Days’). All of these aspects come together to give the demo a sound that is very much its own.

What makes Agbrigg Beast so good, though, 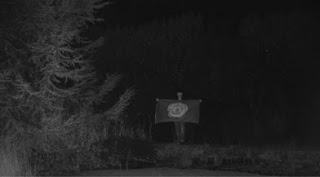 is the sheer strength in the songwriting. Every one of those riffs was firmly etched on my mind after one listen. Songs never outstay their welcome, either, and will often catch you by surprise with a well-placed change of pace. The whole product is a brilliant exercise in minimalism, right the way down to the awesome black-and-white inlay (is that a St George’s flag behind the Rose of York, or inverted cross? Or is it both?) And with relatively few ingredients, White Medal can conjure up a whole gamut of moods, from the triumphalism of ‘Glory Return’ to the contemplative ‘Lost (Cahrr)’.

And then there’s the lyrics. The tape annoyingly only includes the words to the song ‘Agbrigg’, but it gives you an idea of what WM’s going for. As far as I can tell, it’s a cautionary tale about a murderous wolf that lurks around the village of Agbrigg. And it gets better: the lyrics are all written in the Yorkshire dialect (see below), which adds the perfect touch to this masterpiece.

It seems that Seedstock Records have now released this on vinyl, along with two extra tracks. So get it, if you can cough up the dough. Otherwise, do what I did and get the original Legion Blotan tape from George Proctor’s own label, Turgid Animal for only £4. Best enjoyed over a long walk on’t borough.