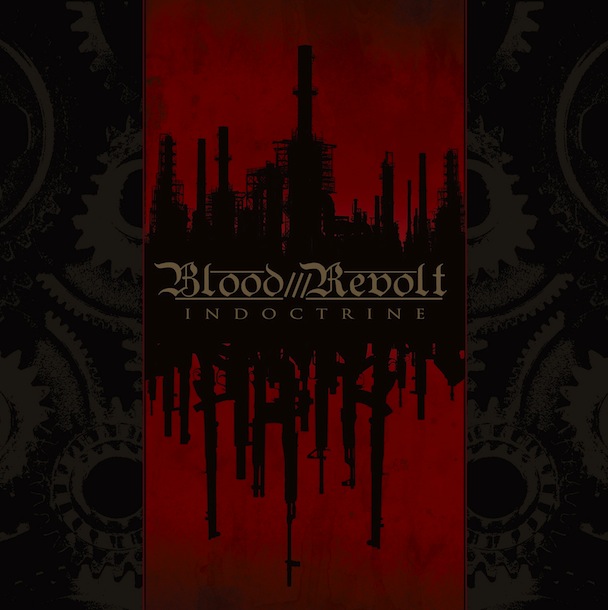 I am god’s executioner… Does it matter which?
Metal’s long running obsession with thinly veiled hate and largely intangible, abstract ideas may explain a few things. It certainly accounts for the preference outsiders and introverts attach to the genre. The lack of consideration the genre gets in the mainstream artistic world seems heavily reliant on this incongruity too. A consistent disregard for relevancy that has built up over the years, focusing on hate for hate’s sake and scare tactics that are now more welcoming to the majority of fans than genuinely unnerving (the usual shitstorm that accompanies a band pushing new territory; fans annoyed that the band have left trodden, comfortable ground to pursue divergent avenues of expression – nowhere more apparent than in the black metal underground).
Sad then (but not unwelcomed) that it took an album like Indoctrine to pierce the veil and bridge the horror with a new sense of relevancy. Blood Revolt revolutionise these conceptual gaps, opening a new path of metal so unnerving and relevant in scope that it annihilates all the short fallings of the modern day metal community. The chosen lyrical content reflects issues that plague the everyday man; this relevancy a far cry from the corpse-painted, skulking men wading through forests brandishing bullet belts and war axes. An irrational belief in God that leads individuals to act on behalf of God’s will. Religious crusaders; noble acts of terrorism that secure places in heaven and moral disasters on earth. The religious hustler who has turned against society: Christianity, Islam, all other walks of faith – this is relevant in any and all cultural, social, political and religious circles. Blood Revolt command this blind faith with unfettering brutality. Simultaneously reaching the outsider metal fan, clutching at the long heralded religious mockery and the relevancy of terrorism in an increasingly multicultural society. Indoctrine is fixed in the first perspective of the liberated, religious devout. The result is remarkable: a genuinely intimidating album, even before discussing the music.
The music Blood Revolt summon, commanded by the voice of Primordial’s A.A. Nemtheanga, in addition to juggernaut drums and doomaxe rituals of war metal veterans James Read and C. Ross respectively, never quite settles down enough to pigeonhole into one or two succinct sub-genres. Take the powercrafted riffs of Weapon and Rites of Thy Degringolade, the inhuman drum mechanics of Revenge set to a clearer, more developed production and one of the most talented, varied vocal performances in metal – and we might be getting somewhere. The fact is, Blood Revolt have shifted the extreme metal paradigm with this recording. Buy their music, go to their shows, support them. Their significant nature extending beyond this stale corner of music, to new realms of cultural and societal implication.
A.A. Nemtheanga delivers his religious sermon; clean vocals that stretch the lungs and deliver conviction with unbelievable power. At other times, his largely restrained talk serves to add a touch of the inhumane, cold, calculated nature of his acts. Take the vocals on ‘Bite The Hand, Purge The Flesh’, where his snarled, cacophonous lines of hate practically set the entire tone. C. Ross has done an excellent job upping the ante on guitar duties. Visible in every song, carefully crafted riffs and melody that lift the album above and beyond the call of war metal. Every goddamn track is brilliant. I would not be surprised if I take up the guitar again because of this album. On first listen the drums seem quite one dimensional, focusing on blasting sessions but subsequent listens reveal variations in tempo and unexpected jumps in play. This style of song writing is nowhere near as chaotic as Revenge or Axis of Advance. It is simpler, revolving on actual rhythms and structures – and this is why the music is so effective. Each instrument bounces off the other, nothing can be deemed superfluous. Everything exercises a meaning and serves to further the musical experience.
Extreme metal is hardly renowned for the quality of lyricism, with most projects exercising either stale, unformatted death, goat, forest clone lyrics, or an incredibly poor handle on their chosen language. It is the incredibly diverse vocal performance of Averill that leaves me obsessing over some of the best lyrics to grace extreme metal in a number of years – ones that I actually care to read. A hard hitting performance that asks nothing of the listener other than to be a witness. Indoctrine is punishing. Marching, martial metal with an undeniable war/black metal touch – a holy original album musically and conceptually. There is something charged and fanatical about the flow of the music, like the strongest mix of utter hatred and self-imposed pomp. A welcome injection of new ideas that leaves most other albums in the dust; so well composed and thoroughly hard-hitting throughout the 42 minutes of the albums scope that the extreme metal soundscape will never look quite the same, ever again. A reinvigoration! Simply put, if you cannot grasp this, well, we ought to begin this religious culling with you.
Blood Revolt (listen) / Profound Lore (buy)
war metal