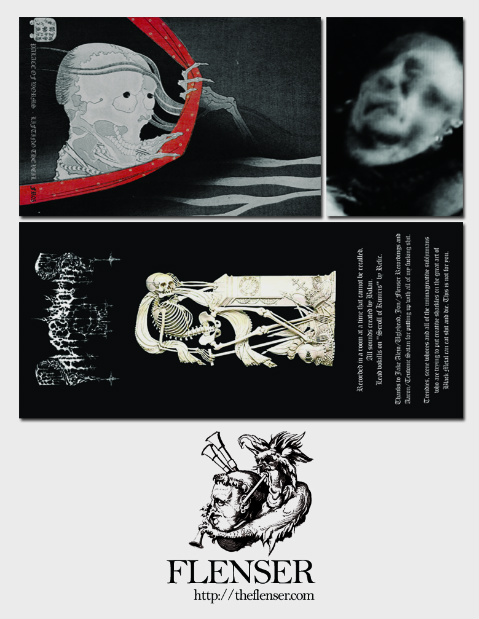 Lifting the Veil is an execution in raw, piously orthodox black metal. An undeniable air of elite swagger backed up by riffs and oscillations that sound as vital and cacophonous as Norway circa 1991. The atmosphere lurches simultaneously into territories of vice, degradation and pure driving power. Like the angular riff work of Wrest set to a boundlessly more insidious upbringing. There is an admirable sense of direction tugging at the dissonant atonality of this recording: an awkward incongruity that would probably fail in the hands of so many other musicians.
Palace of Worms comes highly recommended to anyone who has at some point found refuge in the recordings of other San Franciscan black metal monuments (Leviathan, Draugar, Necrite, etc). Lifting The Veil steps up the ante, assembling an audial horror surpassing last years The Forgotten. Coupling abject disgust for humankind with an aura that seeks to glorify the insignificance and vacuous nature of existence, Palace of Worms can clearly deliver. Balan does well to balance his angular, pissed-off approach to melody with the more atmospheric passages that expand from the dark recesses of sound. As if his campaign of hate and extermination finds absolution in the very insignificance the every-day-man peddles. A kind of inverted Schopenhauer.
Lifting the Veil is packed with the twists, turns and ideas a premature Wrest couldn’t quite pull off. This is about as engaging as modern day orthodoxy gets: undaunted by experiments in sound, moments of crystalline composure that take numerous listens to fully appreciate and absolute driving, eye-rolling sections of undiluted black metal swagger that leave you empowered but bitterly engaged. Post rock, psych and almost DSO like injections of fervour meld seamlessly to create a truly inspired opus. Just give the attached track a listen.
The Flenser (buy) / Palace of Worms (listen)
black metal