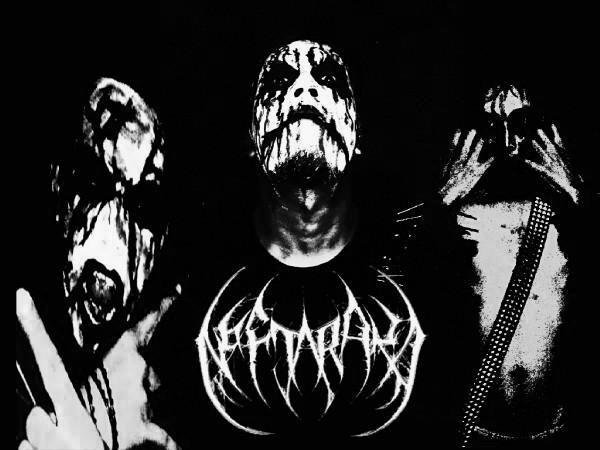 Having given my speakers some time to thaw out after last week’s tremendous compendium courtesy of Beau (and not to mention multiple spins of the new Clandestine Blaze) I found myself in a suitably cacophonous state to attack the melodic orthodoxy at the core of Malaysia’s Neftaraka. While the name and country of origin hardly scream black metal, the regimental orthodoxy that takes hold on their latest full length, Eternal Harsh, is ponderously melodic in its blasting, regimented style. Furthermore they do hail from some kind of forest, albeit Archipelago’s Rainforest. Granted, there is little to no originality in proceedings, which lumbers to life after a lacklustre introduction that seems to resemble a bubbling witch’s brew or some such nonsense. Given a little attention though, the full length unfolds into an inspired take on the now historical blueprint laid down by bands like Darkthrone and Celtic Frost.

While the idea of more than one tempo change per track may seem unappealing to most – if anyone found solace and reverence in my recent recommendation of Godless North (from the Canadian scene report), then you will be aware how this can work in a bands favour, as well as against. Guitars glisten rasped melodies through strained amplifiers and drums clatter and rabble their pre-destined rhythms over a sea of cymbal worship. The real highlight of the album is the guitar. There are those wholly malevolent guitar solos that Zephyrous used in Darkthrone’s early albums, full of reverb and banshee howls, that are all too rare considering the sheer volume of black metal puppets peddling their wares today. At times single, sustained notes ebb and flow over what can only be described as battering ram drums before shattering into the kind of withdrawn riff procession that made Nortt’s output so exhaustingly futile to listen to.

Tracks like S.T.V.R.M even spare the tremolo worship in favour of full chords to hammer Neftaraka’s misanthropic nail into the proverbial coffin of modernity. Transpose a few blasting sections of said single note riffing with the more wholesome full-chorded, binary beat (that by the way is equally well amiss in all modern black metal acts) rhythms that first made black metal so invitingly regressive and euphoric and you have some of the hallmarks of supreme orthodoxy. S.T.V.R.M does go one step further and incorporate the triumphant distorted arpeggio that has been raped and ritualistically reduced to rubble by the depressive black metal missionaries.

Our Father, who hath never existed, non-existent be your name. Thy Kingdom failed, thy will unto Satan, on earth as it is throughout the universe. Give us this day my daily orthodox-reverb-drenched-black-metal-band. Forgive the orthodoxy, as we forgive those whose orthodoxy offends us. Lead us into the abyss, and deliver us unto evil. For the metal, the riff and the convocation of glory are ours. Now and for ever. Amen.