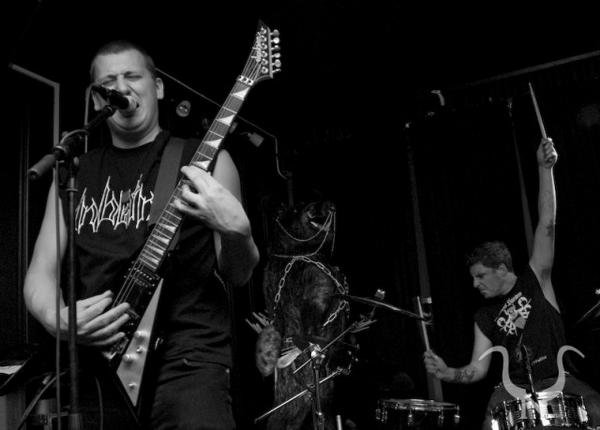 Perhaps the success of Urfaust can be pinned to their ideological base. Putting aside any form, influence or association and dealing directly and unabatedly with the music. That is, neglecting any outsider influence on matters not relevant. Urfaust create ritual music for the true clochard. Beyond and above this, there is nothing. Maybe it has something to do with their obsession with intoxication and the fact that every release seems to have been recorded under strict orders to ignite these rites of intoxication. I simply do not know, and this is why we approached the higher entity of Urfaust with a mild sense of trepidation, to be enlightened.

The catalogue of ritual takes place as a number of EPs, splits and three full length albums. From the beguiling beginnings and fear inducing ululations at the heart of Geist Ist Teufel, where the black metal template is seen in Urfaust in most orthodox form, whose melodic vocal howls would eventually win my fear over and have me as entranced as the next fan – eager for their next offering. Ironically, Verräterischer, Nichtswürdiger Geist arrived and introduced wildly new elements that once again left the listener dishevelled and confused. Be it lending the atmosphere of Giya Kancheli, whose dry, neoclassical avant-gardism sat perfectly with the nihilist ideology of Urfaust, or introducing intonation and structure completely unheard of in the world of black metal.

Der Freiwillige Bettler represents such a monumental leap in terms of musicianship, production and ideas from their humble beginnings that you’d be forgiven for thinking it was a different band (a strange state of affairs when you consider Urfaust’s utter disinterest in progression). An increased number of layers as guitars drone and keyboards vie for attention, the productions actually add weight to the bass and as the tracks progress, the repetitive, almost Aluk Todolo like drum work becomes an experience in itself. A monument of ritual no doubt, featuring the same riffs and howling shrieks that made their debut so interesting – but with added nuance.

Whats the meaning behind ‘Der Freiwillige Bettler’ (The Voluntary Beggar)?

A representation of our music and lifestyle. Also a chapter in Nietsche’s book “also sprach Zarathustra” we like. Urfaust takes power from simplicity with a lot of fire behind it.

Why Intoxication and Possession?

Both things are not recognisable with the eyes, only with the sixth sense or the soul, combine Intoxication and Possession and you have the invisible fire that is Urfaust.

Can you tell us a little about the recording process behind the latest album – and how you go about creating an Urfaust piece?

We recorded the last album in two rites: first Ritual was at the “Lytsewâld Ghostfarm”, an old farm where VRDRBR used to live, completely in the middle of nowhere. We could do whatever we wanted. Since being so remote, in the middle of winter, we got snowed in, so the recording was a bit longer than we expected: best thing was that there was no heating and we had to keep ourselves warm with Alcohol: good times! The second part of the album was recorded at the “Kollum Bunker”, also an old farm, but at least it had heating. The recording process went pretty fast, especially since we worked with mr Deportator again, who exactly knows how we sound and how we work.

It recently clicked with us that Verräterischer, Nichtswürdiger Geist samples the work of composer Giya Kancheli extensively. What is it about his music that made you want to use it on the album? Are there any other composers that you draw upon or could recommend?

It was used to make avant-garde classical music without melody and composition. We like the heavy Russian composers and experiments with sounds of all kind.

You have mentioned the lack of an overarching end-point existing for Urfaust, but how would you track the overall progression of the band?

With every output, we somehow take the music to the next level… be it good or bad, there is no use in recording the same stuff over and over again: it has no use in making “Geist ist Teufel II”, when you can listen to “Geist ist Teufel” at home… Progression is not important, Urfaust is in a constant state and it will be this way. We do not want to achieve anything with the music but to remain in an empty mind state.

Explain your interest in ‘the big nothing’, nihilism and emptiness in previous interviews. As paradoxical as this sounds, care to elaborate?

We try to make music with an empty mind, without form and association, as in Ritual.

Does your disinterest in end-points, purposes and goals stem from the nihilism in your philosophy? Where has this interest come from.

The interest comes from our disgust with mainstream consciousness we saw over the years. We do not like being part of any scene, ego, status and people thinking they own a part of Urfaust. Urfaust is based on the empty things in nature and what lies beyond that, it will always stand alone without any form.

It’s no exaggeration to say that Urfaust is one of the most unique ‘black metal’ bands ever. What sparked your interest in the style? Do you feel that your sound references anything that has come before?

Black Metal is the only musical style that has no boundaries, and therefore fits Urfaust.

Lyrically, what is the direction of Der Freiwillige Bettler?

This time we have some lyrics in the sheets, everyone is free to interpretate them as they like.

Why the German language and not Dutch?

It fits our theme and concept…

How did the unique vocal style come to fruition? What cacophony has inspired this!?

We have no clue how that evolved.

Despite Urfaust standing as a hermit in the metal ‘scene’, what other (if any) acts from the Netherlands do you respect.

We have utmost respect to Gwydion Sageline of Galgeras: he has been a good friend for so many years. He has written a poem for the new album and his contribution was splendid! This guy knows what Black Metal and Black Magic are about; no fooling around, taking action! We could name a few bands and act that have our respect, but I think Galgeras is the only one that stands out, way above the crowd! 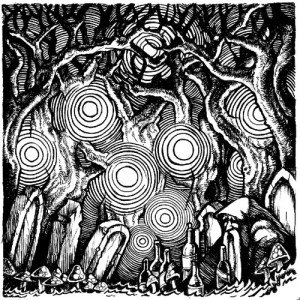 Who did the artwork for Der Freiwillige Bettler? Who is your favourite artist to collaborate with when it comes to shirt designs and album covers?

The artwork of the cd version was made by IX. The pictures where taken in the old wine cellar that functions as the Urfaust Ritual Chamber these days. As for the Clochard version of the vinyl; Tony R. did a great job on getting the right elements on the cover! My favorite artist to work with are Tony R and Cynthia ThornyThoughts. Tony knows exactly what we need and he works fast as a shark. As for Cynthia, she knows how to transform the morbid feelings of our music into ink! Another artist I would like to mention is Robert from Poland; although we used his art only a few times, he really knows how to capture the atmosphere… Besides working with artists, we also like the old woodcut style….

Urfaust merch always has uniquely designed artwork and comes in extremely limited runs. Everything about Urfaust seems tailored towards the complete fanatic. Urfaust vinyl goes for ridiculous prices on e-bay and discogs.com. Will we ever see vinyl reissues of Verräterischer, Nichtswürdiger Geist and Geist Ist Teufel?

We can not help it that people start selling our stuff for insane amount of money! Actually, during shows, we usually bring some original and first press items and sell them for a normal price, 10 euro’s for a cd and 15 for a vinyl or shirt. There where even people that couldn’t even believe they where holding the first press in their hands and they went crazy, haha… All underground Black Metal releases are limited, you cannot make it into a major production. If people want to make money with Urfaust, we do not give a shit about them or about money. There are plans to have a re-release of all previous stuff, but more info on that somewhere next year! Geist ist teufel has been re-released last year by Terratur Possessions, but I think it has been sold out again… no worries, we still have copies available and will bring them to gigs, so the real maniacs can pick them up during one of our Rituals. We have both jobs to keep ourselves and the chimneys smoking. Other money goes in the quality of the releases and the slightly odd instrumentation we use.

Can we expect any new material in the near future?

We recorded a track for the split 7″ with Celestial Bloodshed on Terratur Possession somewhere in 2011. This is a split to commemorate our fallen comrade Steingrim…

Why does Urfaust exist?


To perform our alcoholic rites; be it on stage, be it during recording… We like to go places, different countries, drink with people with the same mindset that we have, and will continue this for hopefully a long time. That is the only reason we exist in this form, we do not feel we have to prove anything to anybody.