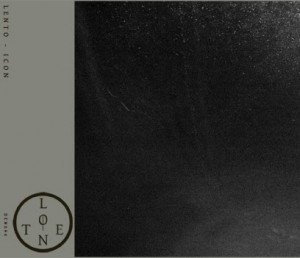 When it comes to heavy music, it’s not often you find technical and textural complexity on the same record. Bands tend to go for one (extreme example: Origin) or the other (any drone doom), with only a select few, like Gorguts, successfully marrying the two. What makes Lento‘s Icon my favourite release so far this year is its ability to weld both into a perfect unity of crushing, atmospheric majesty.

In crafting their brand of instrumental sludge, Lento avoid the worn paths of the ‘Cult of NeurIsis’ approach, leaning more towards the stuttering, dissonant sounds of England’s Latitudes or short-lived Canadian outfit Mare. Repetitious build-ups are thrown out the window; tracks lurch from the funereal to the furious and back again at the drop of a hat, hammering out their insane, dissonant message in constantly shifting time signatures. What does it for me, though, is how they stretch and contract measures just that little bit beyond what’s comfortable, giving the music a gut-wrenching push-pull dynamic.

Icon includes three ambient pieces that are probably responsible for the press-releases’ comparison to Stars of the Lid. There’s definitely some overlap in style, but with Lento the violence is always lurking down there somewhere. Just listen to ‘Throne’, where, under all those echo-drenched layers lies a barely discernible, but heavy as fuck, droning bassline. Nothing, however, can prepare you for album-closer ‘Admission’: after nine tracks without a hint of vocals, the album ends with this six-minute a capella piece. Layers of wordless chanting build a dream-world of eerie discord, a perfect release from the maelstrom before.

At just 37 minutes in length, Icon doesn’t waste a single breath in getting its point across. It manages to be totally immersive and even trance-inducing without depending on the usual tactics of repetition and build-ups. This record is a massive credit to the band and its fantastic label Denovali Records, who, as well as giving it a stunning physical release, have made it available for free download. So stop reading and start listening.

I was crushed to discover just now that Lento were over in the UK last week for shows in London and Bristol. For those of you in Germany, Poland and Italy there is still hope.