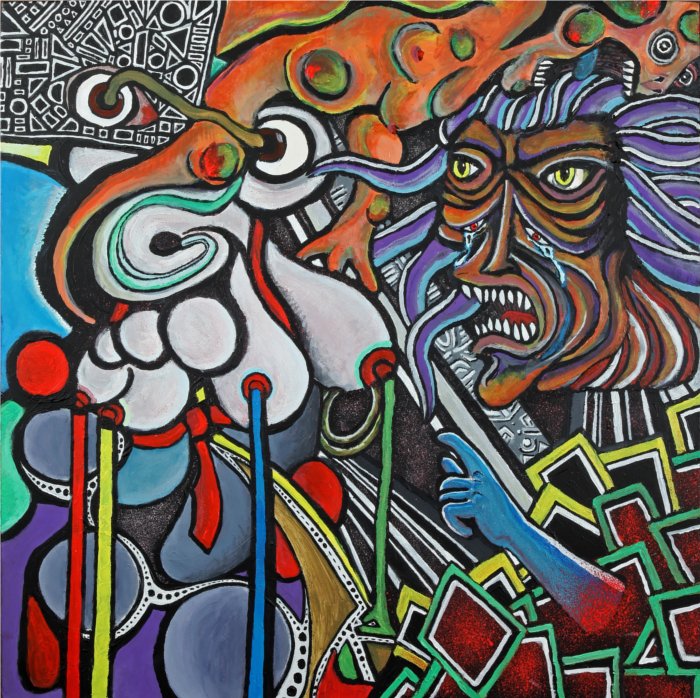 On first listen Nooumena’s ‘Argument with Eagerness’ left me bewildered. The concept of a progressive, experimental album can frequently fall flat on its face. The vision of an idea is often lost when translated into sound. One of the few stalwart examples of success however is Toby Driver’s ever evolving genre-denying outfit, Kayo Dot. From ‘the beginning of tears’ that is Choirs of the Eye to the journey of a terminally ill close friend in Coyote, each record becomes the veritable tour-de-force grouping of idea and sound that remains unreachable to most. Similarly, Deathspell Omega’s triumvirate of discord exploring the metaphysical idea of Satan and his relation to man still represents the pinnacle of the Black Metal movement to date.

Albums of this calibre, that became the watchtowers along my ever winding path of musical understanding, took time to ingest and develop an appreciation for. The scope of sound and idea reached crescendos of feeling I thought impossible in music. These rare moments of being reduced to tears, raised to higher plateaus of elation or deeper understandings of the machinations of the world all left permanent scars on my consciousness. My appreciation took time. I fell in love.

There is a similar story to ‘Argument with Eagerness’. What initially reveals itself as a staggeringly complex array of sounds, moods and contexts slowly unravels its hidden charms on successive spins. Essentially a narrative on an existential crisis between reason and emotion, ‘Argument with Eagerness’ embraces this by including the idea directly in the composition through structure (symmetry, repetition, circularity) and choice of instrumentation, harmony and production (collage, editing, sampling, synthesis). Nooumena alternate between moments of strict composition and flourishing sections of improvisation. There are hidden numbers and meaningful keys that make manifold appearances. The journey is a constant revamp of expectation, one that successfully plays on your memory and feelings.

Sonically, the summery values that lie at the heart of Kayo Dot’s Choirs of the Eye can be heard amidst the clean, staggered riffs so typical to Time Of Orchids. The seventh track, ‘Somehow’, showcases a Lynchian nightmare, with nods  to Angelo Badalamenti. Vocals vary so much throughout the record that pinpointing any reference would be tantamount to lying. Self defined as ‘art-rock, avant-jazz with ambient and metal elements’ and with an influence list longer than my music library, Nooumena arise from the hazy blue French horizon to deliver a piece of music that defies comprehension.

Opener ‘Nameless Reward’ begins as a reverberating, shackled piece of sunshine teetering precariously on the edge of the world. Through coy glances and timid movements, the track builds and gathers momentum as similarities to ‘The Manifold Curiosity’ unfold. Guitars, horns and vocal arrangements each contribute their own exaggerated moments of beauty in the most bizarre unison. Pulverized, open and pushing for a close …and life goes on.

Nooumena take their name from a Kantian notion of thing in itself, free from human perception. It is a way to express what is out of reach of the senses and intellect. It is, ironically, the understanding that the vision of an idea is not equatable to the idea in existence. It is the bridge between having an idea and delivering an idea that so many musicians fail at. Glad that’s covered then. Don’t pass up on an opportunity to hear this. You will be left spellbound and speechless in equal measure. For fans of Toby Driver’s back catalogue, Time of Orchids, (the more restrained sections of) Opeth, Angelo Badalamenti – and fans of music from every background.

Every instrument, mood, moment and refrain is linked together by nothing less than wizardry on the part of the band. ‘Argument with Eagerness’ is perfect in every respect. This is simply the most enjoyable and affecting piece of music I have heard in 2011. Expect ‘Argument with Eagerness’ to be released through Antithetic Records in the coming future. The entire album can be streamed exclusivey, below.