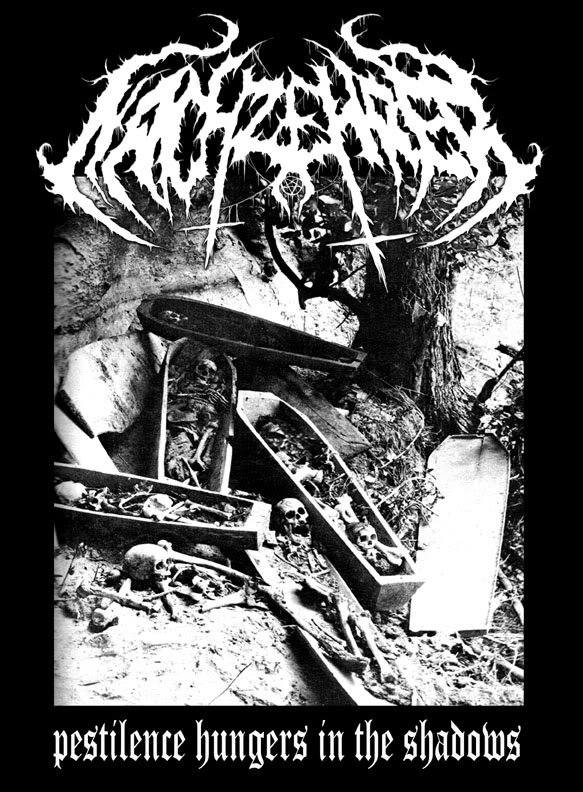 It’s always a relief to stumble across a North American black metal band that sticks to its guns and plays the music we love with conviction and respect. Over the last few years or so, nihilism in the West has become increasingly watered down, perpetuated by an excitable media and equally excitable fans, both with fast-degrading standards. In the meantime, Europe steams ahead having mastered the art long ago, and even now austere Norwegians continue to trump acts from the states. Fortunately, Boston’s Nachzehrer can proudly join the dwindling ranks of great American bands that stand in defiance with their new EP, Pestilence Hungers In The Shadows.

The previous demo, Black Thrash Ritual (2010), has been kicking around LURKER HQ for a while now, and although a title like that leaves little to the imagination, Nachzehrer’s attack is actually much more subtle than suggested. Having proved themselves early on, Pestilence… continues to build on the strengths already laid down. Production has been tightened up from the initial raw rasps to become a full wind-in-your-face roar, injecting new life and staying power into the demo tracks that make a return on the EP.

But what Nachzehrer really play is extremely competent and pure black metal at breakneck speed. There is a strong thrash element to proceedings but it is amorphous and hard to grasp, bubbling up to the surface of seething, grandiose melodies and exploding like magma at a moment’s notice. The opening moments of first track ‘The Awakening’ are swamped in distortion, making blindingly fast nods to the likes of Darkthrone and Judas Iscariot. It’s only towards the end of the song and into the second, ‘Bärsärkar-gång’, that the “thrash” rears its head and begins to lay waste in the shadows.

When the band pulls back from its wintry disposition and hits a groove, the ripened chug of palm-muted strings takes over and hurls the listener back to the domains of Bathory, Aura Noir, Kreator and Destruction, which become surprisingly welcome respites in the face of such brutality. However, the incessant blasting is powered by a very disciplined and skilled line of musicians, all working in precise union towards a common cause. The vocals join to mirror the punkish aura of the record, despite not sounding very punk at all. The drawn-out snarls and yelps have an almost gang chant-like quality to them, a persistent reminder that the leaps between black metal, thrash metal and hardcore are not very far at all. Their aggression isn’t to say that moments of introspective gloom aren’t present. ‘Black Order Of The Goat’ begins with a solemn and depressive melody, which swells with intensity as the drums pile on double-bass rumbles and crackling snare strikes, before breaking out into a blitz of galloping guitars and whirlwind solos.

Pestilence Hungers In The Shadows is available on cassette and CD through two UK labels, Demons Gate and Tombs In The Valley. Earlier material can be streamed at the Nachzehrer bandcamp and the EP will probably end up there at some point too. Check it out, there’s a lot of potential brewing here for a devastating full-length to renew the battle cry in future.