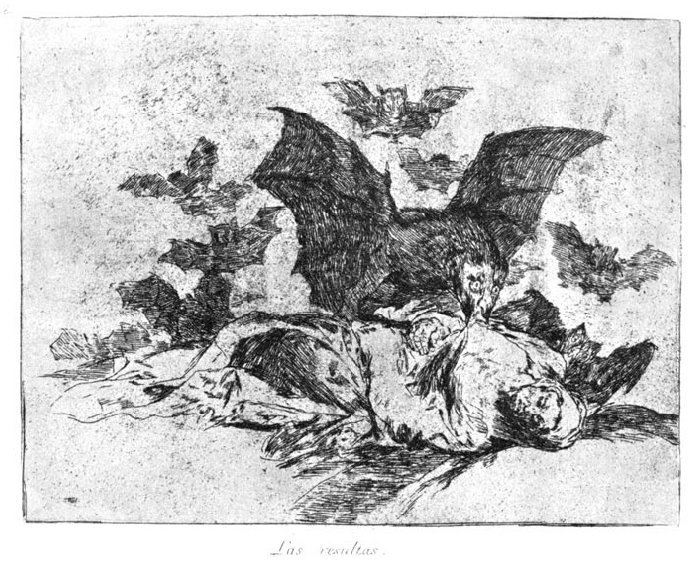 Returning to the fold after a double count (I / II) of battery on the unsuspecting LURKER’s of this site, Dethroned Emperor are preparing to unleash their first ‘true’ release through Human Trafficking. The cassette will be housed in an A5, oversized case adorned in this glorious Goya print. Comes with cloth patch and a 30 page booklet of art and lyrics.

‘Undermine’ was recorded directly to tape, with vocals being overdubbed digitally after. The production is lo-fi, demo like and wholly unholy. Dethroned Emperor are still channelling the atmosphere of Beherit against what can only be described as grindcore interpreting thrash. The riff count of of ‘WAR.GRIND.HELL‘ has been siphoned through the untamed feral grind of ‘Bullshit In, Bullshit Out‘. Guitars, cavernous and soaked in vitriolic urge, are lifted straight from the more bestial arrangement of death metal outfits that have been crawling out of the fold lately. ‘In The Dark’ even channels some subterranean, Cruciamentum-like phosphorous glow of destruction.

Drawn in by the binary beats and sluggish, palm muted chainsaws which leave me aggressive, belligerent and violent. Dethroned Emperor are a channel for the antediluvian urges of yesteryear. I can feel bestial convictions unshackle from the dark recesses of my unconsciousness and rush to the fore. The world is a rotten, dying maggot. Only the violent bludgeoning of my enemies faces in the stones can provide satiation. The destiny of the slug.

‘Undermine’ is Dethroned Emperor’s best recording to date. Like a blunt instrument lobotomy of the brain, Dethroned Emperor will have you embracing depraved, neanderthalic catacombs of thought in no time. Recommended for any LURKER who has noticed a distinct lack of hate in their emotional library recently. Stream two tracks from the upcoming EP below and contact the band at their blog. It remains slightly unexplainable how this band manages to fully engross me in what is perhaps the most over trodden emotion asserted in extreme metal. Hate is a burden, but Dethroned Emperor somehow make it feel fresh once again. Fans of Archgoat, early Crytopsy and Napalm Death should hit this up.