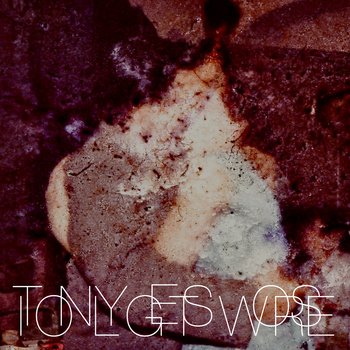 It Only Gets Worse is a new collaboration between the sonic terrorist behind Gnaw Their Tongues et al, Maurice de Jong, and the equally prolific, angst-ridden wordsmith Matt Finney. Suffice to say it’s an inspired pairing. With such morbid, depressive bastards at the helm of this four-track EP, the only escape from the omnipresent gloom on display is down and through.

Although the name suggests a degrading quality, the music is anything but a step backwards. Both artists have upped their game and strayed quite drastically from the course fans may have come to expect. This time round, Maurice has adopted a mostly electronic palette, a move he has threatened in his mainstay projects but always just held off from. Under his guiding hand, the listener is led through disturbing passages of constant mechanical rumbling, embellished by bleeps and bloops of distant, frosty synths and detailed drum programming, all culminating in something quite frightening for what is essentially dance music… of sorts.

Each track explores its own little niche of darkened electronica, making out for a pretty scenic trip considering the bleak industrial wasteland. Opener ‘Ascension’ recalls de Jong’s recent outing as Cloak of Altering, albeit with the guitars now buried in the mix and keyboards flaunted out in front, swelling and deflating atonally like some enormous steam-powered engine while haggard binary beats blast an eerie cyber black metal atmosphere. ‘Slow Prayer’ creeps along the synapses with sparse dub beats, invading the consciousness like a brood of crackling insects, only for this doomed party to be picked up by ‘Weightless Falling’, which sounds like a floor-filler of that seedy club from your nightmares. Then the skies open for the closer, ‘Collapse’, played out by a seductive bass-heavy synth riff and the infectious slow ticking of the drum machine.

But if the music isn’t on the slide, then what’s getting worse? The answer may lie with the grumbling, lachrymose poet who frequents these pages, as for this release Finney’s prose and delivery burns with a rage absent from his previous recordings. Those engrossed in the slowly unfolding tragedies of his life will find plenty of hard-hitting one-liners tucked away within the recesses of this electronic horror. The way he spits this newfound venom befits the cold soundscapes perfectly. He’s a genuinely innovative artist, one of few doing something this original and worthwhile within outsider music, and it’s great that a heavyweight name like Maurice has taken up Finney’s talents and used them to such dramatic effect.

Matt almost begged us not to write anything, insisting that it would circulate on its own. While it may be a just-for-fun project, LURKER is not afraid to state that it’s worth your time if you have a penchant for electronic music. Besides we’re about getting people to hear things, not hoarding up all the underground gems for ourselves. Stream It Only Gets Worse over at their bandcamp or download for a donation of your choosing.