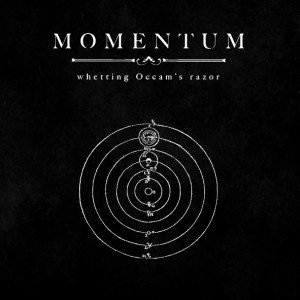 Within the lexicon of underground releases, intent is often spoken of with assumed necessity. It’s almost like it’s not possible to create art for its own sake. That there needs to be some stated meaning behind a creation in order for it to be judged worthy.  It’s a bizarre state of affairs, especially when one considers that the best art usually uses nothing but its own inherent power to convey its message and that the best artists always trust their audience to draw their own conclusions.

That said, sometimes the message is intrinsic in the art, and in a record like Momentum’s Whetting Occam’s Razor, this is certainly the case.  Featuring chief song writer  of  UK hardcore soon-to-be legends Light Bearer, Matthew Bunkell, as well as fellow Light Bearer band mates Alex CF, Gerfried Ambrosch and Joseph Towns, Momentum are from the school of punk that shouts its allegiances and ideals at the top of its voice. Where this often leads to the politics drowning out the music, it is a testament to the strength of this record that this is not the case. Vegan, pro-gender and social equality and with a strong line in atheism and the writings of Carl Sagan, this is a record with something to say. Fortunately, this isn’t high-school rebellion but considered, articulate and intellectual commentary on a number of subjects that are all worth of discourse in their own right.

This is melodic hardcore in the best possible sense. Assertive, driving and wilful while at the same time not forgetting the importance of a good hook. While there’s a tendency within this genre to compromise on either aggression or songwriting, Momentum have managed to achieve a fine balance between the two. There is nothing flaccid about Whetting Occam’s Razor but at the same time, although it clocks in at just under an hour, you never get the feeling that you’re simply being pummelled.  There’s a very considered and clear route on Whetting Occam’s Razor. Initially exploding with energy on ‘Prelude’, tension is constantly built and released, tone expanding before being dialled back and then finally converging on the excellent closer, ‘Gender’.

This is an album with something to say, and an album with intent. For once, this isn’t an attempt to give significance to the sub-par. There is a clear well-stated message backed up by superb lyrics and precise musicianship.  The band is offering this for free right now through their blog and I’d urge anyone to pick it up in appreciation of how good hardcore has the potential to be.