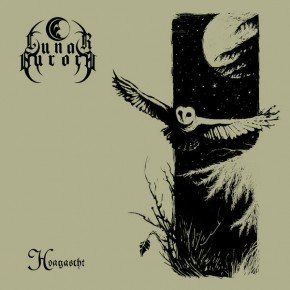 As a band whose entire discography is comprised of standout releases, expectations were riding high for Lunar Aurora’s new album, Hoagascht. In truth, this lurker had been waiting a long time for word of their return. A couple of years ago, in an article about the legacy of the German black metal scene, we conjectured that due to their lingering presence on Cold Dimensions’ website, something was in the pipeline. Now in 2012, five long years since their last offering, it takes a band with all the mystique, prestige and influence of Lunar Aurora to reawaken something quite profound within this cold husk.

One of the best things about this band is that, even from the early days, they would subtly vary their approach with each album, perhaps a result of the revolving-door line-up. Still, whether it was the whip-crack black metal on Of Stargates and Bloodstained Celestial Spheres, the power-chord dominance of Mond or Zyklus, or the soaring, epic melodies of Andacht, none of them sounded alike, yet they all sounded like Lunar Aurora. In this respect, Hoagascht is no different. With just Aran responsible for the music and Whyrhd back to handle vokill duties, it shakes up the formula more than usual, and LURKER is truly grateful for this.

What is immediately noticeable about the record is the presence of the synthesisers. Admittedly they have always been a fixture of Lunar Aurora’s sound, but whereas electronics simply bolstered the atmosphere stirred up by the guitars and percussion on earlier work, here they take more of a leading role. For instance, on opener ‘Im Gartn’ sampled mumblings in the Bavarian dialect introduce an intricate little keyboard sequence the likes of which the band has never touched on before. At first it seems foreign and isolated – but as soon as the roaring, submerged guitars take off and the synth line can still be heard dancing amid the distortion, actually leading the direction of the riffs and grooves, it all makes sense very quickly. Every single track on the album benefits from this newfound electronic sensibility. At times the keyboards seem to mimic nocturnal bird cries of the deepest forest, the pan pipes of ancient tribes at others. One song, ‘Wedaleichtn’, even starts out sounding like a scene from a 1930s Noir film thanks to this slight evolution.

But what else has evolved on Hoagascht? Well, instead of using the same stock of pummelling drum machines that have defined the aggression of previous albums, Lunar Aurora are this time drawing from an expansive archive of different sampled percussion sounds, only emphasising the detached industrial feeling already laid down by the synthesisers. There are also no blast beats in sight, which might come as a shock to some fans, but with the slower grooves come more opportunities to witness the incredible compositions on display.

Because despite talk of “electronic elements”, Lunar Aurora are very much still the black metal band they have always been, and still capable of destroying everything in their path. The all-encompassing guitar tone remains the focal point and it lies at the root of the incredibly moving passages heard in ‘Sterna’, ‘Håbergoaß’ and ‘Reng’ to name just a few. Really every track demands the listener’s full attention, and each one is as song-based and instantly memorable as the one before. Hoagascht is the sound of a band that has been around the block enough times to know it can do whatever it wants now and still sound as vital as ever. It’s the sound of a maturity and distinction completely lost on so many other acts these days. It’s the sound of yet another masterpiece by Lunar Aurora. The purest of atmospheric black metal.

Hoagascht is out now on Cold Dimensions.