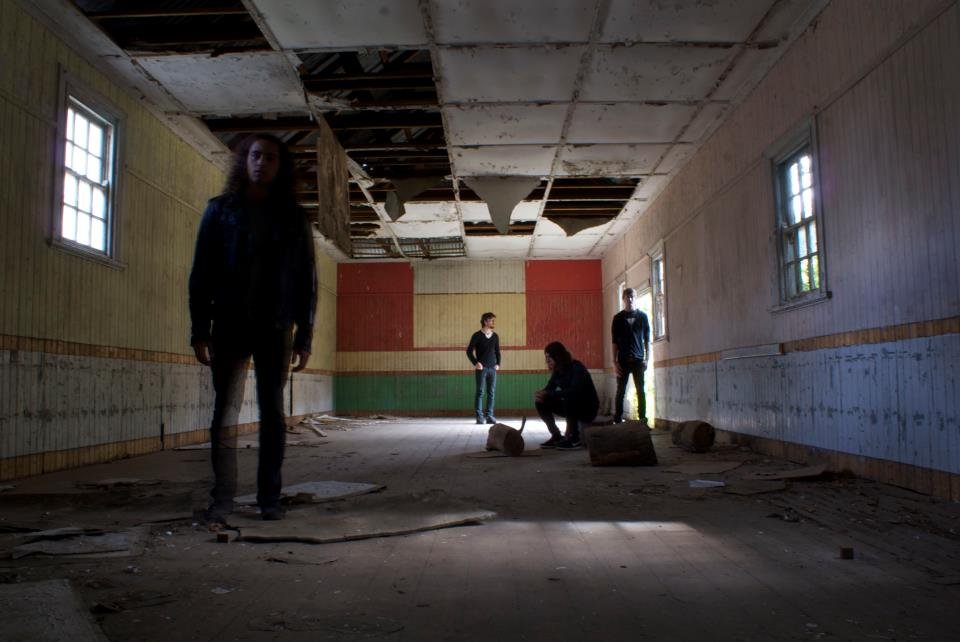 One of the most rewarding aspects of editing a fanzine is that rare chance to stumble upon a quality band still confined to the practice room. At this point, it’s often the case that a mere handful of people have heard any output, making it all the more exciting to spread amongst the loyal lurkers and beyond. Although it’s certainly a risky, hit-or-miss business, sometimes that nebulous spark of inspiration and originality necessary to push a band forwards is already firmly in place, even at this formative stage. When LURKER first came across Wildernessking’s earliest incarnation, this was clearly nothing more than a bunch of dudes revelling in the joys of their own creation and paying little heed to the outside world. But the ineffable flame of passion and talent burned brightly all the same, and we were whisked into an enthusiasm akin to that moment when you realise your mate’s band could perhaps take over the universe one day. The guise of “Heathens” was soon dispelled and the thrashing fury of their demos concentrated and refined into the epic movements of what would become Wildernessking’s debut album, The Writing of Gods in the Sand. It has been an honour to bear witness to this metamorphosis and to play a part, however small, in spreading the word. We’ve piled on enough praise and hyperbole over the past year or so – now it’s time to hear it straight from the horse’s mouth. 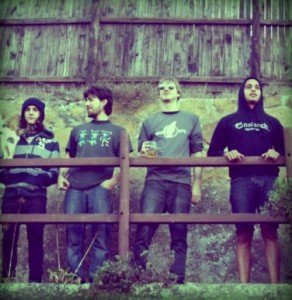 Hails Wildernessking. Who are you, and how did you start making music together?

The band started out as Heathens, a tongue-in-cheek black ‘n’ roll side project. In need of a drummer, Keenan and Dylan contacted Jason through their association within the local scene after the two had written all the material that would end up on the ‘Mock the Heavens’ EP. After two rehearsals in March of 2010, the band started gigging and quickly released another EP in the black ‘n’ roll vein. After the ‘Reign of the Heathen’ release, the trio felt the need to explore their sound further. Jesse, an old friend, joined on second guitar in September of 2010 as the music progressed and expanded. The band released the ‘Morning’ single (the first track recorded as a four piece), which would usher in a new beginning for the band and be the final nail in the coffin of Heathens.

We first came into contact while you were playing as Heathens. Since then you’ve made a pretty obvious leap, both sonically and aesthetically. What happened?

﻿﻿﻿It was never a conscious decision to make a stylistic leap. The progression occurred naturally. Realizing that we could turn this into something worthwhile after releasing ‘Morning’, we decided to take things seriously and still have fun in the process. With the addition of another creative contributor in the form of a second guitarist, we had the opportunity to focus more intently on our song writing, layer our sound more effectively, and musically branch out further than before.

We wanted our name to evoke an image, a title that encapsulated our love of nature and reverence towards it. We believe that Wildernessking truly captures the essence of who we are, our desired aesthetic, and definitely feels closer to home than our previous name. Under this new banner, we have the chance to embrace different elements, both aurally and visually, and are able to express them in ways that seemed restricted or even inappropriate under our old moniker. Wildernessking is certainly a unique name and one that can be interpreted in many ways. The wilderness is king… 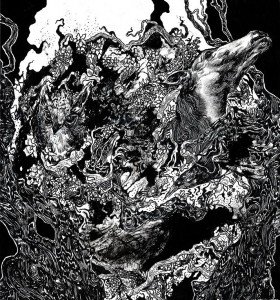 Your debut album, The Writing of Gods in the Sand, is available through our brothers-in-arms Antithetic Records right now. Sounds pretty conceptual, a far cry from the black ’n’ roll days of Heathens! What themes are explored on the record?

We wanted the track titles to outline the narrative, as chapters do for novels. The full track listing is as follows:

Inspired by walks through the many forests of Cape Town, the record is, conceptually speaking, a one-day documentation of a group of travellers in search of utopia, and their glorious pursuit of it. At the point of no return (rubicon), the characters are forced to deal with their respective issues in order to truly move on (surrendering to all that has happened and all that will happen) and reveal the rest of their lives (infinity). Overarching themes include grief, lost love, freedom (in a spiritual, non-political sense), youth, nostalgia, nature (a respect of) and misanthropy.

The artwork is stunning. How did you hook up with Reuben Sawyer, and did you have some kind of briefing for him to work to?

Thank you. We e-mailed a number of people after finding potential artist links on Stephen Wilson of Black Uroborus’s website. Reuben’s very reasonable rates coupled with his immense talent and attention to detail made it a no brainer. Loosely based on the album’s concept, the aim was to capture the essence of the music in an art format. We sent Reuben a brief, along with references and told him to go wild. He completely exceeded all of our expectations.

The Writing of Gods in the Sand is some unique stuff. What has gone towards forming your sound up to this point? Influences are incredibly hard to put a finger on, but whispers of Enslaved seem to surface throughout… Oh, and is that a piano buried beneath the rage?

We come from very different musical backgrounds, yet all share a mutual love for many bands. Our personal diverse tastes have certainly played a major role in forming our sound, even if it is only on a subconscious level, thus making it extremely difficult to identify a distinct set of influences. Those personal traits that each of us bring to the writing process more often than not steers us away from a direction that we would have initially taken in a song. The process is a collaborative one. The ‘piano’ section in ‘Discovery’ is actually a clean electric guitar. We liked how it enhanced the ‘spiralling-out’ ending of the song.

Magnus Lindberg (Cult of Luna) has been making a name for himself mastering the efforts of many a metal newcomer. What did he bring to The Writing of Gods in the Sand?

Magnus is very professional and an absolute treat to work with. He made the record sound dynamic yet cohesive, with emphasis placed on every instrument. It was truly an honour to collaborate with an artist so musical. We love the organic and warm sound he manages to achieve with his own band and felt that his production skills would really compliment our material. 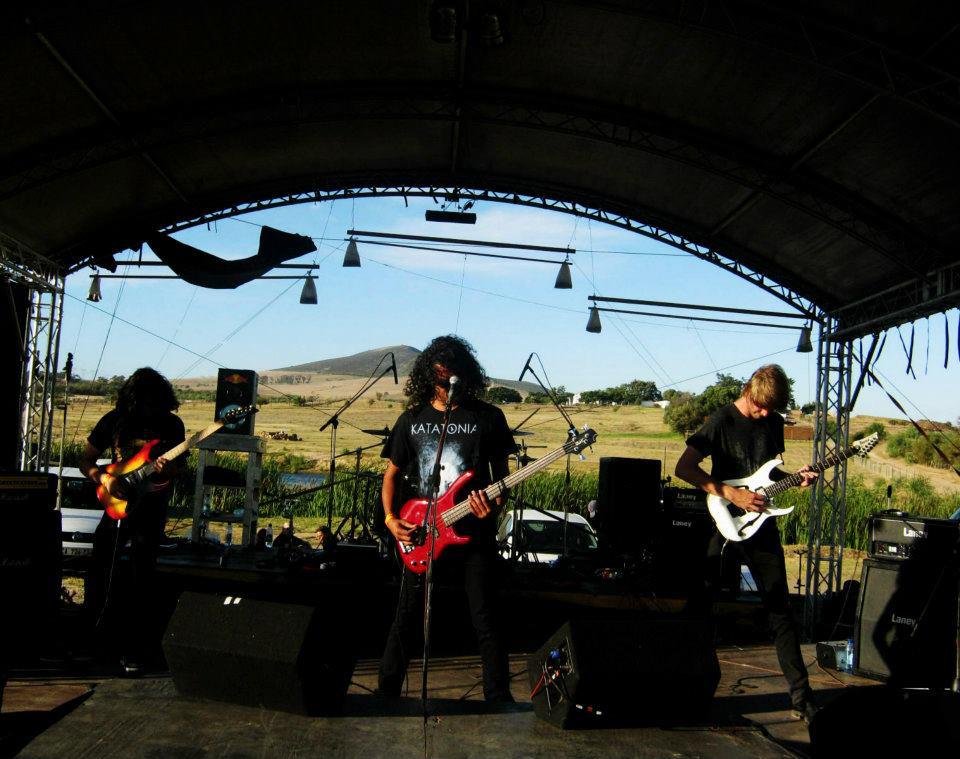 As far as LURKER knows, Wildernessking could well be the first South African extreme metal band to garner any kind of international attention. But the local scene also seems fertile and active. What’s the state of play down there? Are we likely to see any more acts breaking through in your wake?

We have a small, functional scene down here, considering our geographic location and the lack of interest in heavy music from the wider public. Unfortunately, there isn’t a big demand for metal or alternative music of the forward-thinking nature, but that’s not to say that there aren’t any bands and artists doing something original that deserves attention from all parts of the globe. There have been others before us who have stirred international waters and we hope that there’ll be many more to come…

Does each of you have a history of playing with bands in the area?

We’ve all played for different bands in the local scene spanning various genres.

In terms of heritage, black metal is rooted in Northern Europe and the vestigial hallmarks of the style (corpse paint, Satan, paganism and so on) still hold sway for some fans. You’re outsiders, isolated in the southern hemisphere, yet your take on the genre is so refreshing and vital. Where does Wildernessking fit in with black metal, if at all?

The traditional black metal sound and aesthetic is something we deeply respect and love. With these essential aural elements in tact somewhere at the back of our creative minds, we write and record the music we want to, ultimately. The music we are passionate and feel strongly about. As South Africans, we can’t embrace the traditional image of the genre, as it seems foreign to us. We understand the motives behind it, but because of the influence of other genres in our music, this look would not correlate with our sound and would inhibit us from telling our own story. Whether it is black metal or not, is not our decision to make and one that’s entirely up to our listeners or fans of the genre. At the end of the day, good music is good music, and we hope that we’re making good music.

On that note, many black metal bands reap a lot of inspiration from their geographical surroundings. Is this the same for Wildernessking? Tell us about your homeland.

Absolutely. South Africa and Cape Town in particular, is a beautiful place, one of stark contrasts and extremes. From the natural beauty of the landscapes, mountain ranges and oceans, to the solemn and pristine nature of the rivers and forests, it is where the bulk of our inspiration originates. In Wildernessking, we try to capture this array of beauty, and celebrate our land and unique heritage.

You have penguins on the beaches there, too. What’s up with that?

Walking birds in corpse paint… Something to explore on the next album.

We really want the vinyl to happen. How is the fundraiser coming? LURKER was relieved to see the deadline had been extended.

It may take longer than we planned initially, but the vinyl edition of The Writing of Gods in the Sand will see the light of day. Being an independent label, the DIY kickstarter is a great initiative and smart move on the part of Antithetic Records. Digital sales of the debut album have enabled us to contribute to the fundraiser. Every cent generated through shows and record sales is going straight to the funding of the vinyl pressing.

What’s next for Wildernessking?

Our main focus is and will always be the music. New releases in the form of an EP, a split with Young and In the Way, and album number two! All coming your way in 2012. Also, filming for our debut music video has begun…