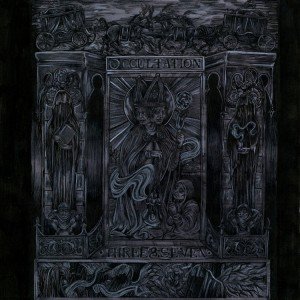 “Occult rock” has made a triumphal return recently, and by the looks of it, it’s here to stay. Whether it’s a matter of nostalgia or something more sinister, I’m unable to tell for sure; but what I’ve noticed is that for some bands it’s much easier to work with an aesthetic than to bring forward a particular sound to go with their message, typically through occult-inspired lyrics. Occultation doesn’t depart much from this formula, but unlike most bands that could be loosely grouped within this revivalist trend, with their first full-length Three & Seven they’ve managed to create a bizarre album that draws on influences ranging from some obvious sources related to its members, to some not so obvious, like early progressive rock and ceremonial music.

The fact that Ed Miller (also known as Nameless Void) performs in this band is clear from the very beginning, even if one isn’t familiar with the line-up involved, as his surf-like, tremolo-picked guitar riffs as we know them from Negative Plane are a clear highlight in this debut, not to mention a similar production, which pushes back the instruments and vocals giving them a shallow, spacious feel to the album. This is where the similarities end, however: the album prominently features female vocals (helmed by MAL and V, who also handle the drums and bass duties, respectively) in an intertwined duo that chants apocalyptic spells infused with moonlight, blood and wine. The lyrics, clearly influenced by Gnosticism and bizarre horror films, follow suit. The moog synth notes tie the melodies and chants together, enhancing the occult vibe this album proudly boasts. And while the riffs aren’t particularly memorable on their own, it’s undeniable the way the guitar works as a whole manages to stand out in the album by repeating motifs from previous songs and constantly shifting moods, going from mid-paced, bitter notes to fast outbursts, still allowing the listener to focus on the less obvious elements such as the subtle basslines and subdued synths in the quieter parts (the latter very reminiscent of bands like Jacula or Shub-Niggurath, whose approach were somewhat similar).

The brilliant drum patterns set the pace with prog-rock arrangements that flow seamlessly between each section, occasionally broken by the ringing of eerie bells.  This prog influence in Occultation’s debut is something worth pointing out, as its dramatic shifts and lack of a linear structure aren’t commonly found in bands with a similar approach, who are usually more concerned with a riff-focused, orthodox instrumentation. Occultation pushes that envelope by combining Nameless Void’s unique riffing and occasional slow, lingering chords with atypical arrangements, giving it a bizarre aura not unlike that of Deathspell Omega, judging by the use of short, dissonant riffs and chanted verses. It never reaches those levels of complexity, but a similar atmosphere is definitely present here.

Without a doubt, it’s one of the most interesting releases Profound Lore Records have prepared this year, full of nuances and carefully crafted songs, even if the first impression is misleading. Three & Seven will be officially released in the US by April 17. For more information, visit Occultation’s Facebook page.