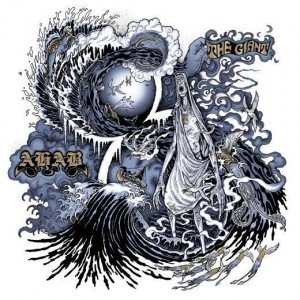 I was taken aback when I first saw the cover art for Ahab’s The Giant. Abandoning their past penchant for dramatic and evocative maritime paintings, the band have opted for a much brighter and almost cartoonish illustration that would make a strange match for the desolate funeral chants of past releases. The image, however, is a worthy ambassador for a new and very different Ahab: almost every drop of funereal gloom has been wrung out of the band’s sound, and replaced with cleaner, brighter elements drawn from post-rock or post-metal. This is a daring move, especially at a time when most metal fans have just about had their full of these genres and their pernicious influence in modern metal. Fortunately, though, Ahab have had the good sense to extract and distill only the best aspects of those genres, and pair them up with some more traditionally-rooted doom riffs. Avoiding the main pitfalls  of post-rock, Ahab’s cleaner passages never meander or drag, but are meaty and to-the-point, kept in check at all times by obliterating waves of riffcraft.

Continuing in the footsteps of 2009’s The Divinity of Oceans, The Giant sees an ever greater role given to clean singing. This is a massive change for the better, because when they put their minds to it, Ahab can pen some excellent melodies. The Giant is full of powerful (and memorable) choruses, beefed up in two cases by the contributions of Enslaved’s Herbrand Larsen, whose harmonies on ‘Antarctica the Polymorphess’ make it one of the album’s standouts. Daniel Droste is the real vocal star, though – as he should be – and packs a huge amount of feeling and variety into his performance.

There really are no other bands playing music quite like Ahab in 2012. In my struggle for a comparison, the best I could come up with is earlier My Dying Bride. Given Ahab’s roots and influences this will sound ridiculous, but if you could imagine Turn Loose the Swans with every trace of gothic removed, you might just come within a nautical mile of Ahab’s sound on The Giant. But this miserable attempt to pin down the album’s unique perspective on doom is really just a counsel of despair. The Giant dwells in an ocean all of its own, and demands to be heard.