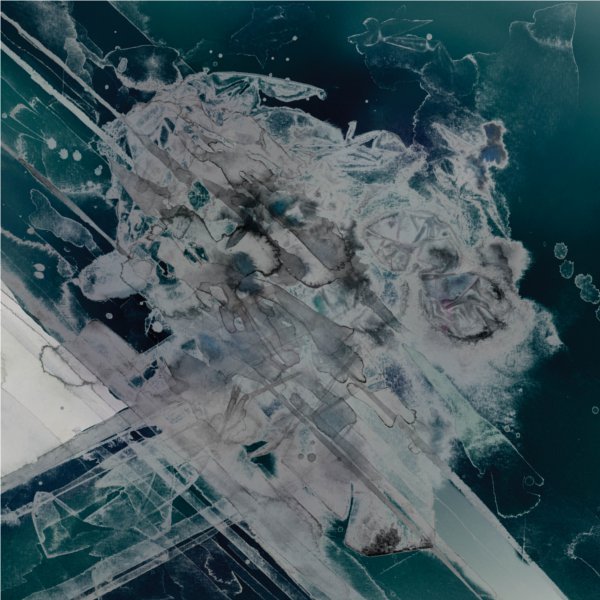 Art for the vinyl on Flenser Records. The CD features a cropped version of this image.

The idea that ‘life imitates art far more than art imitates life‘ is at home with Bosse-de-Nage, who deliver a very personal rumination on ‘what it is to be human’ with their latest effort. III is a journey through joy and anguish, solipsism and misanthropy as well as existence and death. This time around, the black metal entombed in the derivative monochrome artwork of the debut album has been transformed into a work of real life surrealism. III continues down the path of  existential malady, propping the human psyche on its shoulder and perpetuating extreme familiarity with modern misanthropy and self-vilifying disgust.

Using black metal as a base only, Bosse-de-Nage extend their branches even further into the garden of the early, proto-indie rock scene. III feels like the first foray into the adulthood of this ‘hydrocephalic baboon’ as the black metal cocoon (and crux) is slowly shed. What emerges from the short, year-long period of hibernation between albums is a striking metamorphosis. The band reveals their vibrant derangement more garishly than before and this is apparent both audibly and lyrically.

The band has outgrown the Joycesque stream-of-consciousness styled writing that birthed their namesake. There is greater clarity in presentation which seeks to open the leitmotif of each track to interpretation. From the existential anguish that grips B. on ‘Cells’ as he laments how ‘it is all too easy to succumb to the perpetual oneiric existence this lifestyle offers’  to the banal continuance of modern man on ‘The God Ennu’i; ‘I can be found in the corner of every room, says Ennui’. The variety of literary influence on display continues to prove that Bosse-de-Nage is a package deal: the lyrics are seminal to fully engaging with the nauseating corpus of music.

Starting track, ‘The Arborist’, revolves loosely around relationships and an abused figurehead. It is similar in tone to the sadistic incline of tracks like ‘Marie in a Cage’ with lines like ‘young roots will find you and brush against your most tender places‘. It is a great opening track that revels in the mental instability of the music by providing hints and clues as to what lies ahead. The track is unremitting. Vocally B. seems to have varied the speed of his delivery. Instead of the inexorable howling, ignorant of other instrumentation, that agitated some people on II, vocals vary from a clear, dull voice to drawn out squalls.

Second track ‘Desuetude’ reveals a new skeleton in the closet of Bosse-de-Nage. Before a crescendo of aggressive, full throttle black metal is reached the band find themselves experimenting with moments of buoyant exuberance. It fits bizarrely well, as the bands speed and innate ability to shift seamlessly between time signatures shows. There is a trace of Notes from the Underground or Hamsun’s Hunger in the verse too as B. relates a tale of urban disgust: ‘I leave this old thing here on the ground to decay in the sun’s light…The stench follows me on sidewalks, in courtyards, to a bench in the park’.

There is a discernible development in musicianship here too. The drum rhythms and fills that echo through III bring to mind the dexterity and speed of Lev Weinstein. H’s ability to accentuate a passage of music with nuanced changes in snare, symbol and bass drum timings is largely responsible for the success of the album as a whole. They merely drive you deeper into the music. Guitars display a new level of variance too, in the breakaway lead on ‘An Ideal Ledge’ and the penchant for strained, almost catatonic gaps between chords throughout. The warped combination of crisp, full-bodied chords and orthodox riffs allow for slithers of despair, anguish and melancholy to seep through.

Life begins on the other side of despair.

Composition is centered on the refrain, which in some cases last for the length of the track before reaching a release. ‘Perceive There A Silence’ is a great example and continues with the more perverse, existential discourse as lyrics take a sexual turn: ‘a subtraction of extremities; an economy of cavities’ and ‘communication with one’s anus’. Other passages reveal reflections on the act itself: ‘two voices combined and destroyed’ and ‘body and mind inside time’.

‘Cells’ is Bosse-de-Nage at their most deranged. In previous records, there has been a disparity between the insanity weaved lyrically and the more repetitive nature of the music. This time around the lyrics are more grounded and Cells see the band more unhinged. The track swings between swaying chord progressions and a jarring selection of notes and chords while B. narrates a Matrix themed puzzle that echoes the famous brain-in-a-vat problem. It is after this period of narration and uncertainty that chaos breaks forth. Multiple voices scream and wail over a deeper, more visceral variation on the opening riff. It is a rarefied moment previously only hinted at on the lo-fi production of the debut and teeters over an abyss of desperation and pure terror.

‘The God Ennui’ is the zenith of Bosse-de-Nage’s career thus far. It begins with a light, reflective guitar melody before drums and bass help to swell feelings of regret and despair into an upsurge of strident black metal. Here the drumming of H. takes center stage as simple, repeated riffs are invested with pure prowess and triumph. It is one of the most affective moments in the history of the band. Faint murmurs of distant conversations, the repeated reference to ennui, confused twin brothers and the overarching theme of the album suggest a nauseating existential quandary on par with Antoine Roquentin.

Album closer ‘An Ideal Ledge’ opens with the line ‘there is a ledge somewhere set against a deadly precipice which Spring’s nostalgic winds never reach’ and is canonical in understanding the influence and sound at the heart of the track. The classic ‘French’ black metal sound championed by Neige in his assorted outfits is at its most prominent during ‘An Ideal Ledge’. The springtime feel of Alcest and Celestia is stripped bare and imbued with a more somber aura. Memories of Aparitia Sumptuous Spectre linger as drums and guitars juxtapose each other throughout. The album closes with the same juddering feedback as opening track ‘The Arborist’ and suits to bring proceedings full circle to a close.

While the subject matter and brutally affective music propound a strain of black metal that is an uneasy listen, Bosse-de-Nage are cathartic in nature. Those final lyrics, ‘Only to live, to live, to live…’, a desire to overcome. It is on this insanely personal diatribe of existence that they have built their craft and through which they transcend mediocrity. This lurker’s sure fire year end list topper. Available on CD from Profound Lore and vinyl from The Flenser.