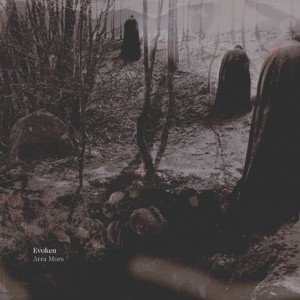 There’s a saying that “the captain always goes down with his ship”. In this case, however, it’s as though the captain has thrown himself overboard, leaving the crew to navigate the good ship Evoken’s sorrowful tempest in his absence. Founding member and guitarist Nick Orlando’s graceful departure from these veritable titans of death/doom due to real-life commitments is a tragedy not unheard of within underground metal, and lesser acts have crumbled in the wake of losing similarly focal members. But this is Evoken! A band that has carved its name indelibly on the extreme music landscape by not once releasing a bad record, and single-handedly nurtured funeral doom from its tumultuous infancy in the early 90s up until now – as they unfurl their fifth full-length, Atra Mors.

The album marks Profound Lore’s 100th release, an apt milestone then, because it’s already among this popular imprint’s best. On first listen, it swiftly becomes apparent that the ideas and concepts fuelling Evoken all these years are more important than whoever happens to commit them to tape. Their characteristic contempt for all life has survived line-up changes before, and it’s still well and truly intact on Atra Mors. The dread-laced vocal menace, the shards of clean guitar that slice through the gloom like a hot knife, the megaton drums switching between a glacial crawl and furious blasting are what makes this band essential. But even so, Atra Mors finds little camaraderie with its predecessors. Whereas Quietus and Antithesis of Light – perhaps this lurker’s favourites – dragged themselves lurching towards the listener with unparalleled malice, Evoken have now settled into a much more resigned and despondent rut than ever before, which should prove a treat for the seasoned follower.

The first two tracks, the longest on the album, set the pace for what is to come, the titular opener creeping in like putrid wind over a desolate no-man’s-land, building a bleak collage with cold synths, rolling drums and down-tuned doom until a throat-rending growl shatters the landscape and Evoken dives into what it does best. Yet there are plenty moments of beauty and reflection amid the hopelessness. ‘Descent Into Frantic Dream’ sounds just that, with its somniferous clean guitars reaching a climax halfway through which elicits such an emotionally visceral response that I find myself screaming curses and reaching for the volume dial every single time.

It’s an exhaustive opening 20 minutes, but the piano-led instrumental ‘A Tenebrous Vision’ provides a brief, spine-tingling breather before ‘Grim Eloquence’ ploughs ahead, bearing so many great riffs and scorching solos that you will be singing them at work, much to your unenlightened colleagues’ dismay. Indeed, the reason why Evoken have remained at the top of the pile all this time is that, rather than pushing funeral doom further into an unoriginal niche, as newer bands seem wont to do these days, they’ve always just sounded like a death metal band of the most grim degree playing really slowly. Atra Mors is simply riddled with nasty riffs from start to finish, which unexpectedly surface out of the surrounding misery like dead fists through a frozen lake.

‘An Extrinsic Divide’ tentatively sows loss and despair until it can take no more, flying off into bludgeoning tremolos and sluggish double-bass kicks. Likewise, ‘The Unechoing Dread’ carefully treads the sometimes-thin line between death and doom metal with aplomb. But closer ‘Into Aphotic Devastation’ is the ultimate exorcism. A chilling violin cries out before being smothered by the sheer weight of the guitars comandeering the hypnotic theme. Its precise composition slowly sucks the will to live as it thunders towards its own sudden and dramatic death – then release, and all personal demons of the moment flee.

Although treading a slightly different path, Atra Mors ends as all Evoken albums should: with the listener a quivering, emotional wreck. This band forces its victims to confront aspects of existence many would rather ignore, but in doing so only makes us stronger. This is, simply put, yet another triumph for Evoken and one of the best records to be released this year so far. Invoke.