Although LURKER is an elite brotherhood of like-minded individuals forged in blood, steel and ink, there are the occasional lapses when we actually disagree over music. And this isn’t mere amicable rivalry – sparks fly, verbal blows are exchanged, and swelling egos are left bruised and whimpering. One recent example is Panopticon’s newest album, Kentucky, of which our opinions and interpretations were so brazenly divergent that there was little else left to do than to lay it all out in the open and enter the ring. Cue the SMACKDOWN, where two brave lurkers square up in a no-holds-barred literary skirmish to the death, bidding to convince you, the reader, of an album’s worth… or lack thereof. There will typically be two rounds, a venomous slandering followed by a furious rebuttal of support and praise, or vice versa – whoever steps to first begins the battle. Who wins? You decide. Comment as you see fit, but the aim of this series is to question some of the odious groupthink surrounding each year’s most “popular” albums. But enough! Let’s fucking brawl! Challenger Pavel approaches…

On his new album Kentucky, Panopticon’s Austin Lunn has turned from general broadsides against The System to a timely, vivid look at an Appalachian landscape scarred by mountaintop removal, debilitated by occupational disease, and haunted by poverty. Lunn tells the suppressed story of unionised coal miners who dared to resist management, connecting their doomed struggle to the vicious environmental conflicts that currently wrack his native region. This is clearly an ambitious album, and Kentucky is also a significant change of direction for Panopticon in musical terms. The project has become known for “red/anarchist black metal” – vaguely Weakling-ish riffage interspersed with nods to crust punk – but now Lunn strives to match the crippled beauty of coal country with something more poignant, incorporating the elaborate leads of Agallochian progressive metal and the grandiose harmonic structures of the post-rock/screamo milieu. He weaves some bluegrass instrumentation into the metal and breaks up the more aggressive tracks with renditions of three traditional mining songs, all dark and highly political.

With its continuously shifting style and its lengthy documentary samples, Kentucky works more like a soundtrack than a traditional album. It is, seemingly, intended as the musical equivalent of a great realist film, an effort to evoke the rot in the heart of America with a synthesis of visionary poetry and hard-eyed observation. Yet despite Lunn’s commendable earnestness, the album reminds me less of a desolate backwoods epic like Winter’s Bone than a mockumentary like Spinal Tap. The only thing transcendent about Panopticon’s latest is its totally unintentional humor value.

The album opens promisingly with Lunn’s original bluegrass instrumental ‘Bernheim Forest In The Spring’. There are enough gorgeous melodies within this sylvan tangle of banjo, fiddle and guitar parts to fill a short EP of less intricate music. Full of forward momentum, it instantly pulls the listener into Kentucky as envisioned by Panopticon, and into an emotional maze of yearning and joy. As it ends, there’s a palpable sense of potential, and experienced black metalheads will be twitching for release. But when the inevitable blastbeats come crashing in at the opening of ‘Bodies Over The Falls’, there’s no ripping tremolo riff, no soaring cloud of keyboards. Instead, Panopticon leads with a fucking flute, wailing out a stilted rehash of the Titanic song. This would-be theme barely coheres as a musical utterance, and it’s jarringly out of tune with the rhythm guitar part. Just when the flute joke starts wearing thin, Panopticon transforms it into an orgy of harmonised lead guitar. Imagine a riffless Thin Lizzy, or a clumsy shredder in a Euro power metal band trying desperately to impress thirteen-year-olds. It’s almost painful to hear Lunn playing this pseudo-melodic fluff with so much pomp and conviction, especially after his effortless lyricism on ‘Bernheim Forest…’.

This isn’t a momentary misstep. Throughout Kentucky, the unadulterated musical and lyrical power of the bluegrass songs testifies against the mannered weakness of Panopticon’s “metal” compositions. ‘Which Side Are You On’, a rallying cry for striking miners, is built on a martial stomp and a vicious pentatonic riff. Electrified and screamed, it would sound a lot like Graveland or Moonblood. And where ‘Bodies…’ is an Anthro 101 apologetic for the slaughter of the Kentucky Cherokee by the “palefaces”, ‘Which Side…’ is a vehicle for exquisitely grim propaganda. Its long-forgotten songwriter reveals a backwoods world where there are “no neutrals” and the threat of physical violence is ever present. He distinguishes between allies and enemies with the clarity of a polished knifeblade: “Will you be a lousy scab or will you be a man?” This is the true spirit of black metal, a spirit utterly absent from a song like ‘Black Soot And Red Blood’. Meandering from emo riffs to acoustic plucking to a smattering of metal tropes, this ten-minute ordeal sucks its secondhand gravitas from an interview with a veteran miner. 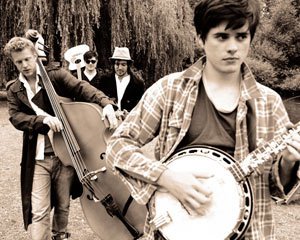 Despite Panopticon’s roots in the crust punk scene, Kentucky is as bloated as any progressive rock classic. Instead of cutting the bullshit, Lunn revels in it, maximising the length of tracks and piling on digressions as if these were inherently desirable features of music. ‘Killing The Giants As They Sleep’, the album’s aspiring epic, offers scant reward for enduring its twelve minutes. Opening with some of Panopticon’s signature non-riffage, it soon recalls the goofy flute motif from ‘Bodies…’. Past the three-minute mark, ‘Killing The Giants…’ begins to show its true colors. The beat drops out to highlight some flashy arpeggiated wankery, which opens up into a full-on wankfest in the august tradition of Opeth. There are many, many notes, all of them utterly disposable. It’s the musical equivalent of a very long sentence without a coherent structure, or even a verb. By 5:10 the guitars have pulled together into one of the album’s only cohesive, memorable themes. Panopticon milks it interminably, until the obligatory “post-rock” section seems like a welcome relief. Complete with sampled speech, introspective plucking and basic feedback manipulation, the only purpose this passage serves is to remind the listener that Lunn isn’t just some crusty metalhead – he’s into Godspeed, or Mogwai, or Indian Summer, or whatever. (These bands all wrote some long songs, but they were masters of the structural rigor that eludes Panopticon.) ‘Killing The Giants…’ concludes with predictable unpredictability, snapping back into a droning blast section enlivened by frenzied violin soloing. There’s chaos, but not much power.

Funny as it is, there’s also something sad about the way Kentucky cheapens the things it’s meant to celebrate. Rather than truly incorporating bluegrass into Panopticon’s sound, Lunn has exploited it as a musical condiment, a facile signal of novelty and depth. His emo/prog/metal riffing has nothing to do with bluegrass’s hallowed melodies or its horror vacuii approach to harmony, and the acoustic instruments do little more than suggest a vaguely “folky” atmosphere. While the old mining standards are, in themselves, Kentucky’s finest moments, they have no musical relationship to the metal tracks. They’re borrowed words and melodies, and in the arc of the album they function as filler. Panopticon is billed as fusing black metal and bluegrass, but Lunn has simply placed them side by side.

Panopticon gives coal mining the same superficial treatment as bluegrass. There can be no doubt of Lunn’s political commitment, but he has stumbled in his attempt to articulate these sentiments. In the context of a pastiche like Kentucky, left-wing mining lore appears as just another form of aesthetic supplement. Panopticon borrows the voices of miners in their songs and in their testimony – to lend its music a kind of secondhand authenticity. And yet the very act of borrowing gives the impression that there is an authenticity deficit to be overcome. The artist, in an attempt to bring his audience closer to his Appalachian home, inadvertently places them at a distance from it. There is also an ethical valence to this paradox: It’s fine to weigh in on someone’s behalf, but less adroit to speak for him. This is especially true when many coal miners now embrace the right-wing politics that destroyed both the unions and the mountains in which they toil. Lunn’s desire to commemorate bygone miner radicalism is understandable and sympathetic, but his cack-handed artistic intervention has more in common with an NPR documentary than a Woodie Guthrie album.

People seem to love Kentucky, but they don’t. What they love is its image – the profound and progressive album it purports to be. Kentucky achieves sublimity, however, only in the vast gap between what it promises and what it delivers. If you’re looking for some really good heavy metal union songs, try British Steel.