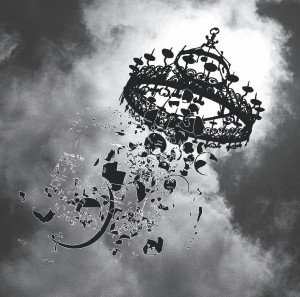 There’s a wealth of bands and solo projects involving Kevin Gan Yuen (Sutekh Hexen) in which he explores aural dissonance through the guitar and feedback, but none are as rich in storytelling as Circle of Eyes. Teamed with the vocalist of Swamp Witch (James R.) and the guitarist of Black Fucking Cancer and Necrite (known as Thrull), the collective uses a basic set-up to create a sonic experience revolving around seemingly improvised and painfully slow riffs, creating layers in the vacuum and letting them interact in the background, flitting through different moods and timbres instead of assaulting the listener with endless power chords. Part of what makes this work is James Plotkin’s brilliant production. Some parts are even reminiscent of Khlyst, one of his best-known projects, in which his chaotic bursts gave an eerie edge to Runhild’s deranged vocals. A similar atmosphere is conjured by Circle of Eyes.

This first LP consists of three songs, two of them sprawled across Side B, ‘Woe Betide the Worms’ and ‘To Wander’. ‘Penumbra (Awoken)’, the first track, begins with loud, trudging riffs echoing through the cavernous depths of the hellish cavity it evokes. James’ tortured screams break into the beat-less, tuneless drones, adding a layer of madness to the setting. While it’s pretty standard guitar drone at this point, the song seems to tell a tale of a man plunged into the dark crevices of the Earth’s core, falling into a shapeless cave surrounded by primordial matter. This is when ‘Woe Betide The Worms / To Wander’ takes place, consisting of reverberant, listless plucking and occasional synths, trailing back and forth as the vocals drown in the background, allowing the guitars to shimmer and soothe until they ultimately fade. While the physical version only consists of these three pieces, the digital download version included with the record comes with three extra tracks from their remastered demo, on which the building blocks of the band’s concept can be heard.

The amount of effort put into this album is evident from the start, and it’s not surprising considering this is the first official release under Anti-Matter Records. From the cover artwork designed by Kevin Gan Yuen to the poster included in the record by Stephen Wilson (also known as Black Uroborus and one of LURKER’s closest collaborators), the vinyl release reeks of dedication to the craft and attention to detail. A worthy addition to anyone interested in experimental music with a well-planned aesthetic. Circle of Eyes can be purchased via Anti-Matter Records here, or on their Bandcamp page here at a price of your choosing.