I don’t know if it’s a reflection of the state of metal today or just a symptom of getting older, but nowadays I come across very little new music that completely blows me away. There have been plenty of great albums this year that I’ve enjoyed a lot or at least recognised were good – more, in fact, than I’ve had time to listen to – but almost none have reignited that unforgettable feeling I used to get as a teenager whenever I discovered something utterly new and exciting. It’s partly my fault for listening to genuinely too much music, but only partly. So much of modern music is about splicing forms that already exist, digging up niche styles that everyone had forgotten about, or stubbornly hammering out music whose sole purpose is to stay true to a particular ideal. In each case the music feels meticulously calculated to the point where its robbed of all vitality. And then some utter fucking gold comes along and I wonder why I’ve spent so long being a moping, pessimistic butthole.

This year there’s been one demo that has really hit home and that I keep coming back to. In fact, I’ve played it so often I’ve completely knackered the tape. 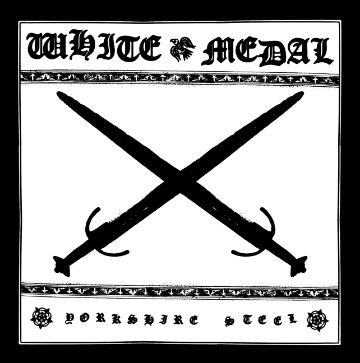 If you’ve been reading LURKER for a while, you’ll already know where we stand on George Proctor’s White Medal. His recent demo, Yorkshire Steel, has all the vitality and immediacy that I’ve been missing in modern metal. It’s so powerfully evocative of dark, dank landscapes that it invariably ends up sucking all of my attention away from anything else I’m trying to do, and transporting my mind to the grimmest of all imaginable moors. I know people write this kind of stuff about Black Metal all the time, but in White Medal’s case it’s no exaggeration. With his background in noise, Proctor’s instincts for atmospherics are second to none, and pay off especially well in the demo’s rumbling intro and the eerie piano interlude. Over the years his vocals, too, have matured into a deep and powerful growl that lends further power and murk to the sound, as incomprehensible as the lyrics may be to a namby-pamby southerner like me.

The best mark of White Medal’s growth, though, is in the quality of the riffs. Man alive. The swinging verse riff of the title track and the unforgettable tremolo leads on ‘Agait Back t’Ooam’ just beggar belief. That’s not to say that WM’s earlier efforts lack riffcraft, as testified by the demo’s new reinterpretation of old favourite ‘Agbrigg’, perhaps Proctor’s most memorable song (when it came on in the car on the drive back from the Uffington White Horse, Rich recognised it within a couple of bars). The demo’s strongest song, though, is the excellently titled ‘Wod, Blod n’Feathers’, a shifting masterpiece of Celtic Frost and Leviathan-esque leanings. Hear it here:

Luckily for you, it looks as if there are still some copies of this tape left. Get one now from Legion Blotan and play it till it breaks. It will be time well spent.