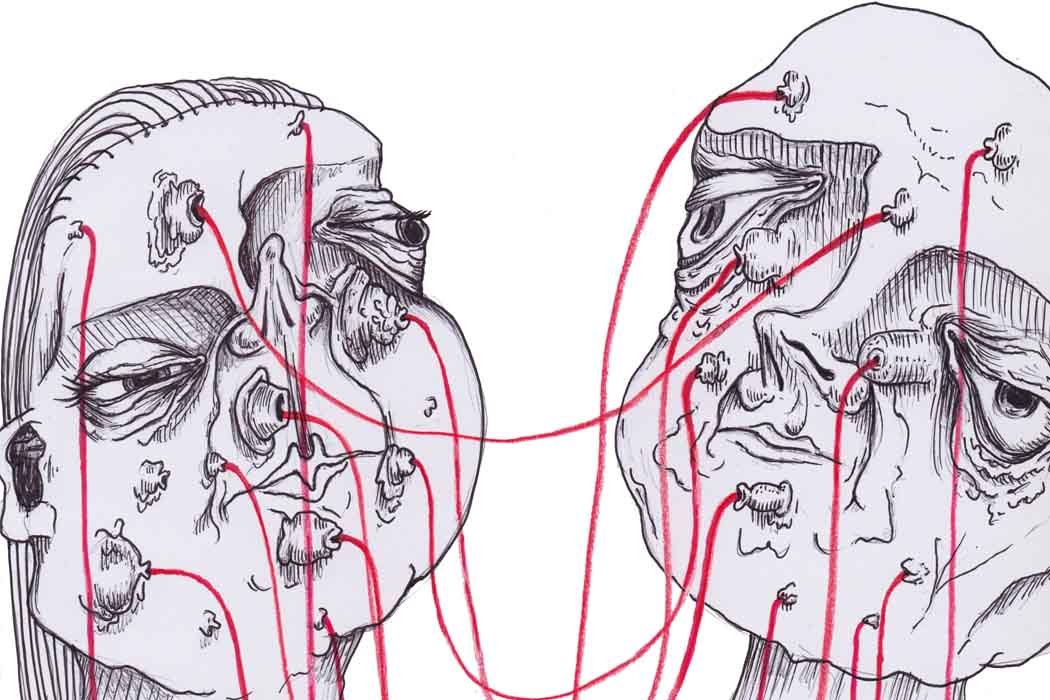 In the shadows of the Rocky Mountains, this Lurker is currently making inquiries into the local music and record scene on the frostbitten plains of Calgary, Alberta. A city built on oil, cattle and homesteading; there is no denying that within the chromed steel surface of the city old-god-conformity rules with a fistful of dollars. But when you start digging there’s some true aural gold to be found, buried among the top 20’s and the cringeworthy Amp radio publicity stunts. The search for the Lurk eventually led me to a few good people, marvellous beer and a little house on the prairie called Melodiya. 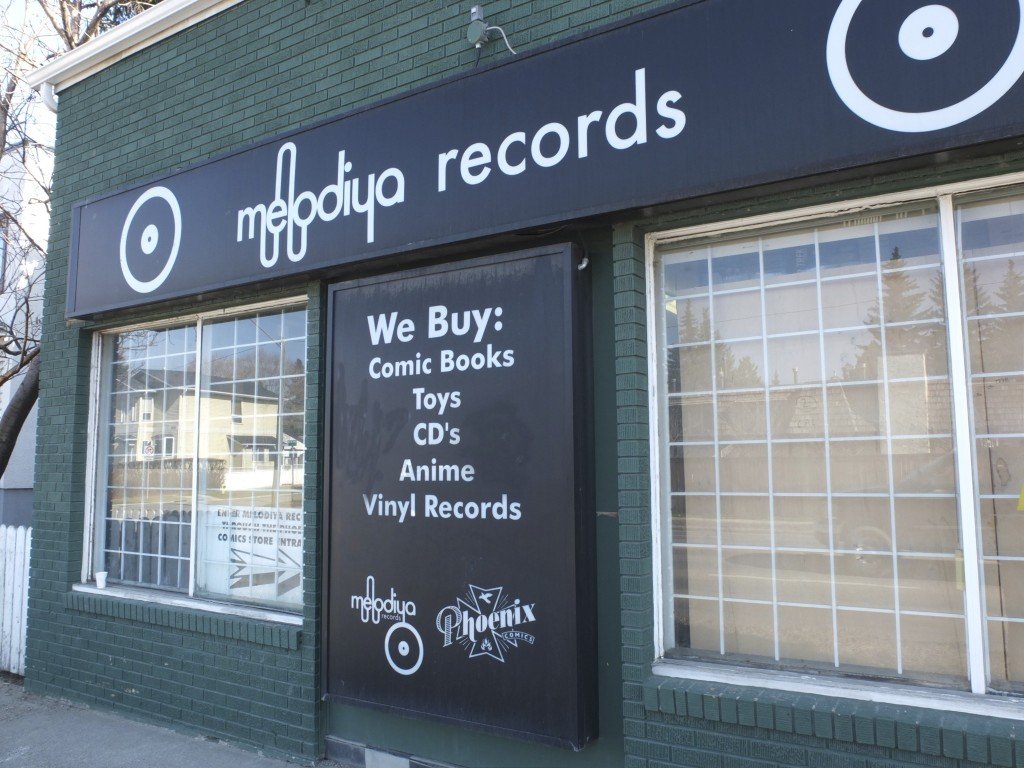 The following feature is an interview with manager of Melodiya Records and connoisseur of all things blackened, Eddie, local patron of underground music and psychonaut extraordinaire Rose, and local artist Kaitlin.

This interview has been edited for length and clarity. Artwork graciously contributed by Kaitlin.

S: Who, what and when is Melodiya?

E: “Melodiya actually used to be a label as well as a Record Store. I run it, but I don’t own it. The shop itself sprang out from a Calgary Band called The Primrods (seriously, check ‘em out), who were signed over to Geffen surfing the grunge wave and made one great record before being dropped in the wake of Kurt Cobain’s suicide. They used the advances from their records to start the store and label called Melodiya. They put out a bunch of other local band’s records and it’s been around since… ‘96? Yeah 96. Eventually they stopped putting out records – the Chad Van Galen record being the most recent one, and that was a joint venture put together with Flemish Eye Records. Nowadays we’re not really acting as a label. Every few months we get submissions from some techno guy in Spain, but we’re not really looking.” 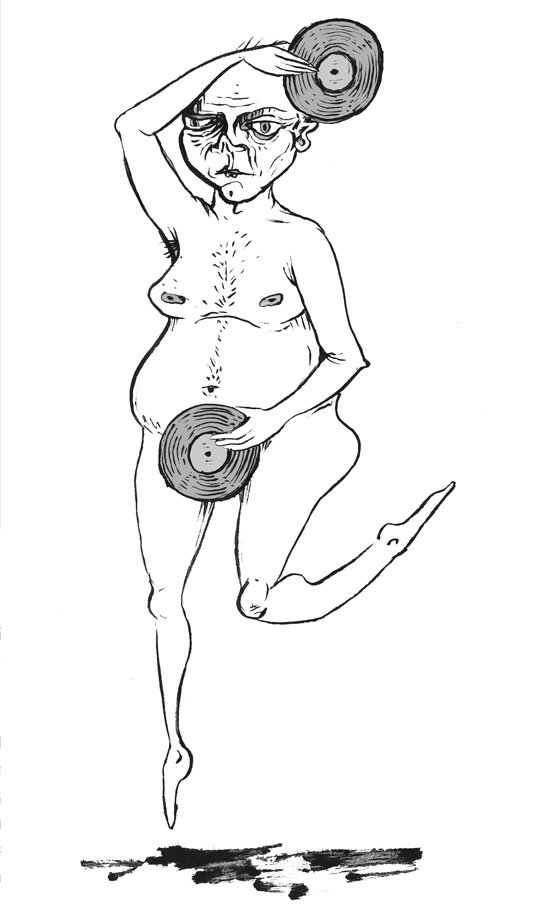 S: But you still promote local bands by selling their records, right? I saw you guys sporting the taught and riff drenched Weir’s 2013 release.”

E: Yeah, I mean The Weir’s all over the place, but we do really like to take in local bands and act as a distributor. Especially for the real awesome stuff like Weir. Fucking great band.

And on the question of local promotion – definitely, we always have. Really since the inception of Melodiya as a label itself, there’s always been that partnership, kind of beginning when Sloth records was acting as a label as well. Putting out early stuff by Knucklehead or the Bloodbath at the Chinese Disco comp. Since being dormant as a label though we’ve continued supporting a ton of local labels such as Flemish Eye, Mammoth Cave, Pint Sized, Revolution Winter/Bart records, USSR, Shake Records (Vancouver), and Fuel Injected Records. And even individual artists who release independently such as Wake, Shooting Guns (Saskatoon), SAVK, Outlaws of Ravenhurst, and Jung People. But that’s something I think is really consistent in Calgary, at least between ourselves, Sloth, and the Inner Sleeve. Dave Parks was saying for a while that the Dark Forest catalogue might get a vinyl release, maaaannnn I hope that happens! But anyway, we definitely try to support local acts and labels, it is certainly difficult though for the artists. I can only play a release so many times in the store to try and make people aware of it. The numbers, sales-wise, are nothing that can compare to an artist selling merch at a show.

I think as far as independent labels/artists are concerned, #1 on their list should be trying to keep wholesale cost down. I know it’s completely insane to ask most of the time, but if someone is looking at an Oh Sees record on the wall for $18 and your record is next to them for $22, they’re probably not willing to take the chance. Whereas I’ve noticed if I can put a local release on the wall for $15 or so someone will be willing to take the chance. “My friend told me they rule, gonna try it out.” That’s exposure, growing your audience. Chances are you’re already in the hole, why not sell something at cost and actually move a bunch?

S: So you manage the day-to-day of Melodiya?

E: Yes. I do the ordering and management of the place. Except on weekends. I don’t work on weekends – I only shred.

S: Is that pretty much the reason for when I step into the shop I see Cult of Fire’s Ascetic Meditation regaling the stand?

E: Yeah, I get stuff from War On Music. 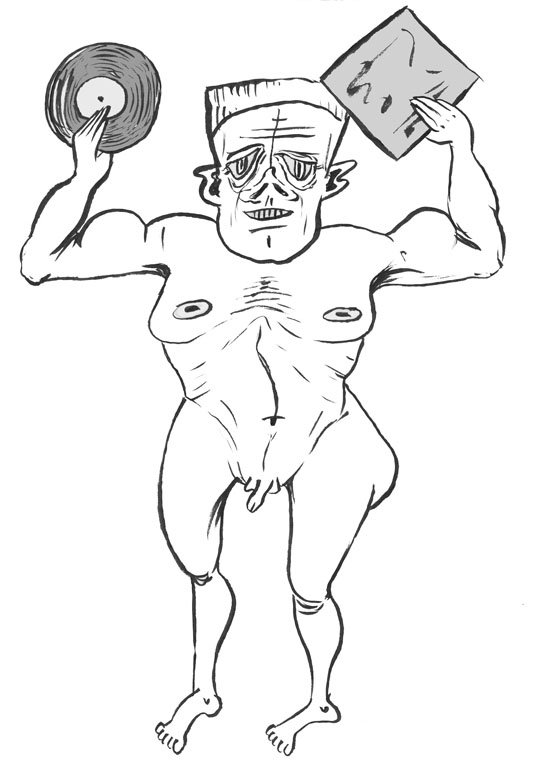 S: There’s a bunch of stores in Calgary that field almost 20 year old Burzum albums in a vain attempt to cater to the extreme side of things, but having some furious charcoal Czech BM seems somehow more deliberate. Do you cater more to a specific group here in Calgary? Rose?”

R: Yeah, I’ve been going there for about 10-11 years, and I’ve always had the sense that the breadth and depth of the selection of music available has really made it remarkable. It’s like it’s specifically been catered to small pockets of people with obscure tastes in music, something that I’ve never seen anywhere else. Which I guess comes out of the people staffing the place, really. Melodiya is a really amazing place to find metal, ambient and noise. This is where I discovered Temporary Residence, Kranky and Southern Lord. For me they are the labels that have, more than any others, stood the test of time.

S: Calgary has a history of producing some fine garage-style vibes. The Golden Calgarians spring to mind as a truly underrated band of the 80’s. Fuelled by the home-brew crank of a Dr.Science, they took the scuzzy dives of Calgary and Montreal by storm. Today, Calgary has a wealth of metal bands like Skymir, Blackest Sin and Burning Effigy, oh, and Dark Forest to name a few. Do you think that the legacy of anti-establishment in performance and music still rings true?

R: Yeah, I would for sure describe Calgary’s underground music scene as always having had a rebellious bent. In a city so “awkwardly normal”, you’re definitely going to have a lot creative undercurrents running loose.

S: How does Melodiya fit into that tradition?

E: Ohh, I like the scope! I think Melodiya is just a continuing the notion of sticking with the things you love, and often those are the things you do well. Because a lot of the bands that were on Melodiya’s label weren’t necessarily loved by everyone, but eventually became very appreciated by people here in the city. Calgary was a normal punk rock town, still is, really. People love(d) getting sloshed and having a mosh, and a lot of cool stuff came out of that. So yeah, Melodiya definitely had its roots firmly planted in that scene. Even the name was taken from the USSR’s state owned record label, and in a pre-internet age that was a pretty cool move and slightly subversive, right? Now it basically means we get people writing us asking for Pyotr Tchaikovski and Dmitri Shostakovitch.

S: Tell me about your relationship with War on Music.

E: Our selection of Metal is entirely provided for by Charlie at War on Music who’s absolutely wonderful. He’s very good at facilitating his label as a distro which basically grants us the possibility to get whatever we want from wherever. He’s really good at encouraging us to give him new labels and bands, and he’ll do his best to get it. Having him as a connection has pretty much opened up a whole new scene for Calgary’s extreme genres.

S: So was War on Music already familiar with Melodiya?

E: No, not really. He was just a guy who had opened up in Winnipeg and though I had heard of his band, Wilt – which is beautiful – he was the one who emailed me. He basically offered to open up Western Canada to all sorts of delightful stuff. It acted as a gateway to a lot of re-releases and older stuff in the speed, trash, black and death genres coming into the west.

S: Do a lot of the other record stores stock his stuff?

E: I can honestly say that I don’t see a lot of the other stores in Calgary specifically taking advantage of this incredible offer, no. I mean, some of his stuff is out there. Re-releases of Gorguts and such. Old things that War on Music does real well. But right now it’s basically just Melodiya who’s getting the new wave stuff from Europe, because I ask for it. 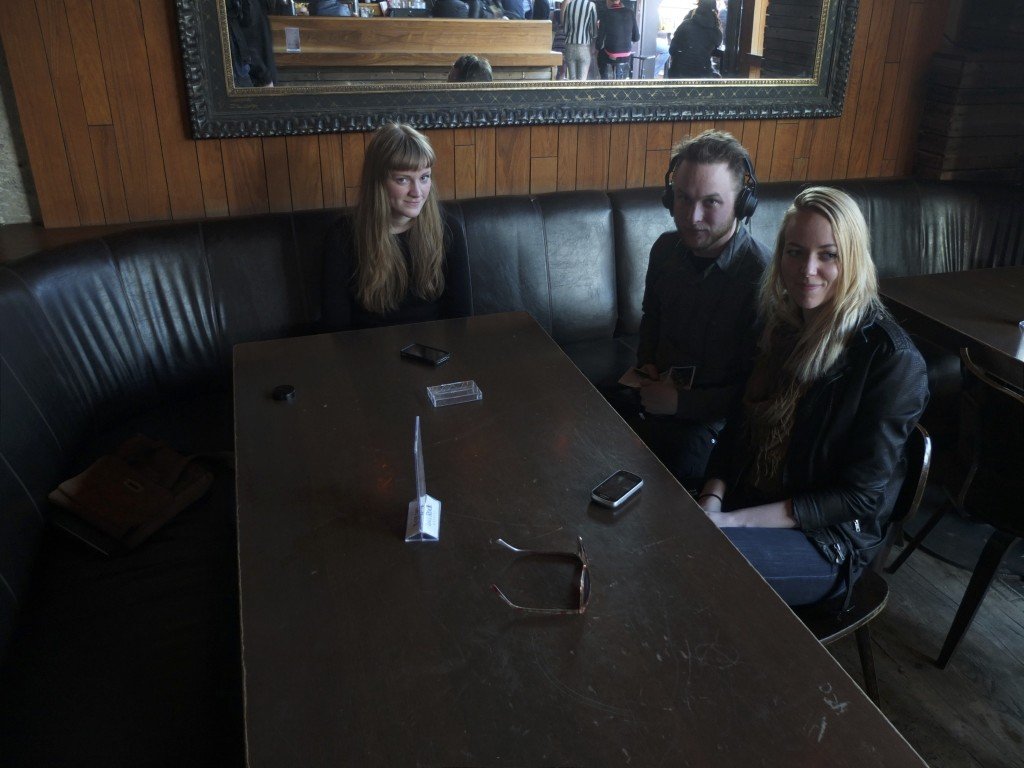 From the top to the right, Kaitlin, Eddie, Rose

R: I think it really depends on having the right person getting these things in to the city. Calgary, though booming as an oil town, is still out in the boonies. There’s really just a few small gems hidden around town where you can find that special something, be it book or record. And those people and places like Melodiya are really defined by golden people who try to bring amazing things into this city, this is also partially the reason that it all stays underground and comes off as so magical for the people who really want it.

R: ….. Well, I basically reserve Melodiya for buying the records that I really, really want since I know I’ll find them there. I really enjoy the whole ritual of browsing.

S: What formats do you guys stock/buy?

E: Mainly vinyl. We have CD’s… But they’re pretty much on consignment. Same with tapes. We actually used to have a dude that came around with tapes, but he died.

E: No, but he closed. He used to do tape trading and stuff. It was a lot of fun! Very nice guy, sad to see him go.

S: So who, apart from Rose, makes up most of your customers? There a lot of battle jackets running around?

E: Ha! We have a lot of Eric Clapton dads, and the seniors combined with the hipster crowds and regular collectors. Everyone, really.

K: Yeah, I don’t think there’s necessarily any special sub-group that comes and shops at Melodiya. All the kids go to places like Sloth and Record Land, who also get all the media attention, really. You could almost say that Melodiya is a bit of an outsider. But it thrives on that counter-culture.

R: Yeah, you guys really tread the fine line between selling out and dying.

S: The liminal line of half-death.

E: Haha, no, but I really have no problem with that. We take everyone’s business. There’s nothing wrong with the mainstream, never has been in my opinion.

R: The fact that you are trying to bring other things than the mainstream into the city sure counts for a lot! You guys are far from floundering. But I think that on the whole – for the city’s sake – it’s important to get the diversity out there.

R: They go to HMV. I think they like the social aspect of it more. Perhaps I’m generalizing, but it seems that they’d rather look at the artifact rather than owning it. I think North American metal, perhaps lacking the same material history that Europe has, enables it to evolve in a very different way. There’s a lot of focus on drone here in Canada and the U.S. and I have a theory that the thick, heavy riffs play more off the vast landscapes that this continent offers. The Weir definitely showcases that for Calgary case.

E: Yeah, the people are always the biggest charm of running a record store. Even the smelly ones. In my experience I find that everyone buys Bolt-Thrower though. SUV or not, it speaks a universal language. 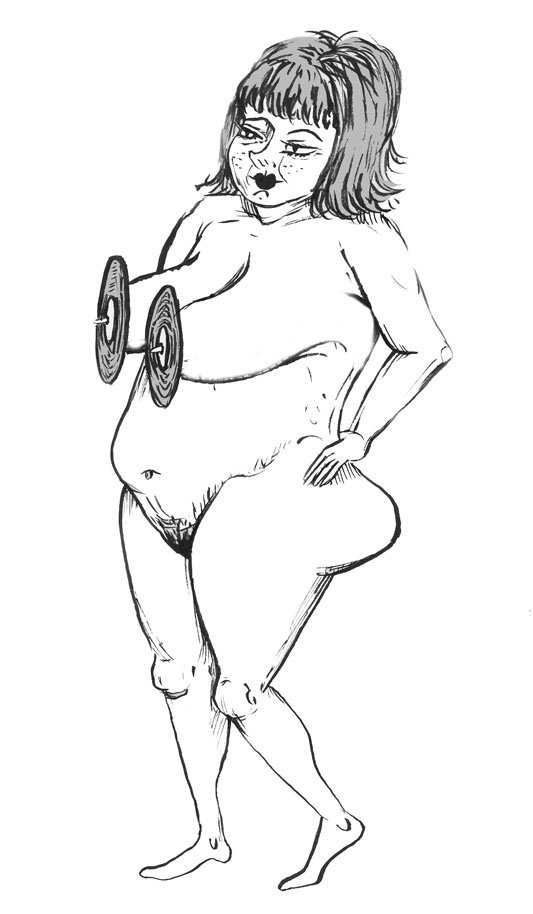