Cacophonous, violent, vaguely-psychedelic, trippy black metal noise is how I’d attempt to describe S.V.E.S.T. Which stands for ‘Satanas Vobiscum Et Spiritum Tuo,’ by the way. Which means… I have no idea. Something about Satan.
You may have heard of the Pays de la Loire duo before. They released a 2008 split with fellow Frenchmen and current darlings of the scene, Deathspell Omega, who contributed the mammoth Chaining the Katechon to an additional three songs by S.V.E.S.T. I fear that the profile of Deathspell and the sheer quality of their track may have eclipsed the mandatory black metal that is latent in S.V.E.S.T.
Spinning their debut LP, Urfaust, one could think you were listening to some obscure psychedelic krautrock from the past; bluesy, wavering and covered in a twinkling lo-fi atmosphere… then the blasting begins and you are instantly reminded you are listening to some pretty fucking raw black metal.
What’s interesting is that the psychedelic atmosphere remains and you are being sucked into a swirling vortex of hypnotic noise. These epics span in sound from breakneck speed, life-affirming assaults to sombre, crushing heaviness and each track has a real life and feel of its own. But beneath S.V.E.S.T’s progressive tendencies lies a healthy loyalty to the black metal tradition. Old school principles underlie this music yet it is bent with such finesse that it’s become something fresh. Recommended smoking music. 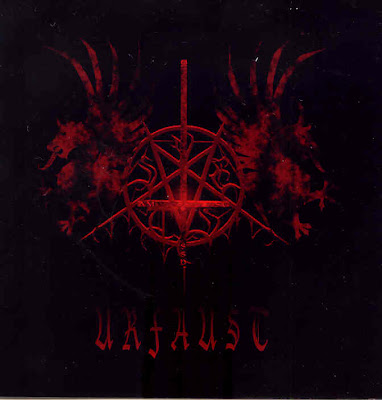