We’ve mentioned the exciting news that Godspeed You! Black Emperor are to reform this year to play a handful of dates across Europe and USA, but it might have been hard to gauge our doe-eyed excitement at this prospect, hidden as it were beneath the steely contemptuous semi-snarls we wear on our maudlin faces at all times.
But we are excited.  And anxious to see a band we have been listening to for ten years now, live in the flesh.  It means something.

And like any other wide-eyed fanboys, with the prospect of such an encounter, what have we been doing?  Dusting off the old vinyl of course.  Giving each album a spin.  Marking sure our music library is as comprehensive as possible, and scour the internet for live recordings, a teasing taste of something to look forward to.

Now these recordings aren’t especially difficult to find, but they seem to only be available through slightly dubious file sharing sites from disparate unknown blogs and all off kilter. 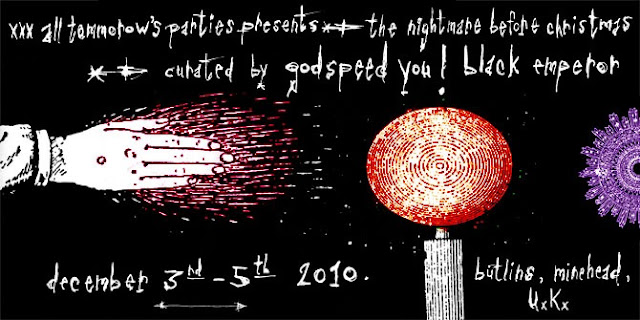 So in celebration of the year of our Godspeed, 2010, here are some of their best recordings: all in one place, mediafired, nicely tagged, and ready for your enjoyment.