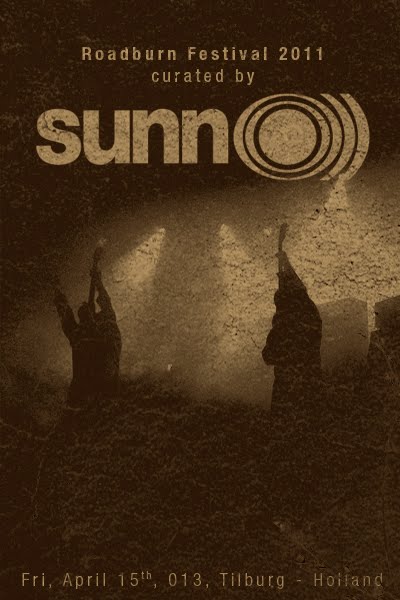 Everyone’s favourite festival for the doomed, stoned and droned is to be curated by Stephen O’Malley and Greg Anderson of the infamous drone duo Sunn O))) next year. They are the fourth curators of Roadburn –  following Celtic Frost’s Thomas Gabriel Fischer, Current 93’s David Tibet and Neurosis – since the festival started in 1999. Each year Roadburn has lurched and expanded dramatically so perhaps it was to be expected that the simultaneous darlings and demons of the underground are to step up. Whether this will be a Southern Lord circlejerk or yet another brilliant line-up remains to be seen, rest assured you’ll hear about it here. Either way, the organisers are pretty stoked about it:
“We are truly looking forward to the new ideas and visions that the crossover drone duo will bring to the festival next year. When asked to sum up Roadburn in one word, “progressive” would be a fitting choice. Evolving and improving are part of this. The festival is a tribute to the open mindedness of its bands, curators and audience. The joy comes from expanding musical horizons, and with Sunn O))) acting as our curator we’ll definitely be in for some artistic surprises.”
Roadburn 2011 will run April 14 – 17.
doomlivesludgestoner