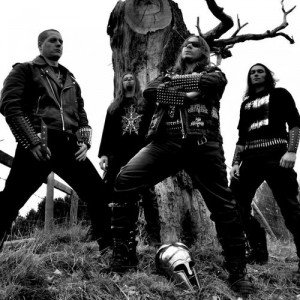 Two years ago, London-based metallers Scythian released their debut full-length, To Those Who Stand Against Us (Necroterror Records). With a near-indescribable sound, the record boasted a blend of classic death and thrash elements with Blood Fire Death-style epicism. Equal parts rabid and majestic, Scythian offer a new and exciting take on extreme metal, the perfect antidote to the current slew of old-school rip-offs. (Mini-review over.) In 2011 the band are back in the fray with a new release and some exciting live prospects on the way. I caught up with guitarist A. Satyrus and guitarist-vocalist S. Vrath to find out more. Expect some interesting thoughts on historical metal, time travel and the price of Polish beer.

You have a split 7” on the way with Greek legends Kawir. How did that come about? Do you know those guys personally?

S. Vrath: We had the ‘idea’ to do a split years ago, mainly because we are quite fanatical about vinyl….

A. Satyrus: Our split with Kawir is all down to our bassist Alexandros, who has been a major figure in the Greek black metal scene since the ‘90s with his band Macabre Omen (If you’ve not heard them, they’re like the Greek Bathory!). Since joining Scythian in 2008, he has helped us a great deal, negotiating our first release via Necroterror Records and getting us in contact some major names in Greece. It is a great honour for us to work with Kawir – as pioneers of the first wave of Greek black metal, last descendants of the Gods!! We are yet to meet Thertonax – great celebrations in store when we do.

S. Vrath: The split is due out via Greek label Nuclear Winter Records in a couple of months. The fact that one of the bands and the label are Greek is a sheer coincidence.

What’s the new material like? Any big changes in sound?

A. Satyrus: We’ve kept to our roots but learned a lot as songwriters and musicians with time. On the upcoming split, our track “Grunwald” represents the progressive element of the band (in the vein of tracks like “Open Steppe” and “Kurgan Funeral Chant”). We’ve also picked up a nastier, more aggressive sound over the years. This track is an EPIC that took us a full year (and many different versions) to complete – it’s hard to compare it to anything we’ve ever done.

As far as I can tell, a lot of your lyrics are about war, and idolize the warriors of old. What makes you sing about war in the 21st century? Is it pure fantasy, or is it prompted somehow by events today?

A. Satyrus: It’s not really that simple. We look to the past for a lot of our inspiration, but the past isn’t everything. Our lyrics are about the violent struggles of man – behind every battle lies the struggle for an ideal (freedom, territory, religion, revenge…). Whether that struggle is mine or yours is irrelevant – but anyone who believes in anything… must fight. Any lyrics that refer to ‘battle’ are a metaphor in that sense. We hold nothing in common with so-called ‘historical’ bands and the pagan metal scene – never forget that.

Is there any particular point in history you’d return to if you could?

A. Satyrus: I probably would have said “The Dark Ages” a few years ago, but the idea of  being alienated by my own time now seems escapist…and weak. I was born in the 20th Century, an incredible era of conflict and change.  Would I trade it for the life of a bronze-age warlord, or a feudal peasant? No…things were just as bad or worse. If I returned to the past…it would be to see just how bad things really were.

S.Vrath: Probably to those brief days when cans of Polish Beer cost 99p instead of one whole pound in the corner shop. I’m also not too hot on the new Pestilence album, the world was definitely a better place without it, back then. 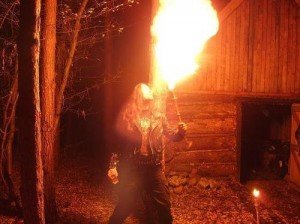 You’re all from different parts of the globe – how did you come to meet?

A. Satyrus: In London you’ll find the greatest (and worst) that any nation has to offer.

S.Vrath: The underground metal scene in London isn’t all that big! Satyrus and Volgard met years back at some crappy audition for another band, but decided to start a band with each other instead (called Scourge). They looked for other band-members for years, auditioning lots of folks but just couldn’t find the right chemistry. I met Satyrus coincidentally in 2004, as we studied at the same University. Turns out it was a pretty good school-year, as members of Grave Miasma and Crom Dubh were also studying there at the time. Later on Alexandros, a long time supporter of the band joined our ranks on bass.

You draw a lot of elements from the old gods of black, death and thrash metal, but craft them into something that sounds your own. What do you think of the recent wave of old-school metal that’s less concerned with originality? Do you think it’s healthy for metal always to look to the past?

A. Satyrus: If you mean ‘new wave of old Swedish death metal’ (to quote B. Southwell, Diocletian), then no. Pay homage, pay respect, but don’t fucking copy! Fenriz once said that “metal is a circular movement” – he’s probably right. What goes around usually comes around… except when it comes around twice it tends to be shit.

S. Vrath: I recently read the press release of the new Sonne Adam album and was cracking up as Metal Blade went on and on calling them super original throughout the two-page document. Don’t get me wrong, Sonne Adam are a brilliant Morbid Angel-influenced Death/Doom and I enjoy the album thoroughly and frequently, but originality is something that doesn’t enter into it. Sometimes being good at what you do is enough. That said, I would be a complete hypocrite if I started bitching about originality, as we draw our main influences from 80’s Sodom and Bathory. With over forty years since Black Sabbath’s debut what can you do? We’re in an era where it’s not about what you play, but how you play it. Every riff has been played, so all one can do is create something different with the influences of the past. After all, it’s not like I like any of the new stuff that the major labels are pushing… now that’s bad for metal.

Most artists we talk to refuse to tell us what modern metal they listen to, but I’m going to ask you anyway: what are you favourite bands/releases from the last ten years?

Vrath: In retrospect, it’s been a pretty good decade really. All of the above, I’d say, and of course, Negative Plane – both albums, Adorior – Author of Incest, Neutron Hammer – Extermination Command, Repugnant – Epitome of Darkness, all D666 really, Gospel of the Horns – A Call to Arms, Manowar – Warriors of the World, Beherit – Engram, Nifelheim – Servants of Darkness, Primordial – all, Immolation – Close to/Unholy Cult, Absu – s/t, Pagan Altar – all, Esoteric – Subconscious, Inquistion – Invoking… I’m sure there’s plenty more, but I’ve run out of this can of Polish beer.

What do you think of the scene here in the UK (if we can speak of one)?

A. Satyrus: We can, but only now. There are some great bands around today, and all of them struggled to cast off the poor reputation established by those who came before us (late ‘90s – early ‘00s). During that time there were still some great bands in the underground like Mithras and Adorior, who stood their ground – even in the face of such overwhelming shit! Not only do we have great bands and a healthy scene today, but we’ve got fantastic promoters like StrataNael, Arcane and Meat Fiddler, putting on some of the most unique events in Europe. We also have Zero Tolerance and Terrorizer magazines, two of the biggest extreme metal mags in the world. 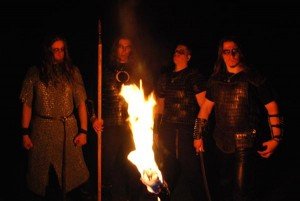 Scythian live performances are something of a rarity. Any reason? Do you have plans for any shows in the near future?

A. Satyrus: We don’t play pub gigs and we don’t pay to play – Nothing rare or mysterious about that. We’ve had a lot of offers, but we want to represent ourselves properly with the right bands and the right setting (our stage setup gets more and more complex by the year) – we also want our costs covered. If you’re a promoter and you can meet our requirements, contact us at scythian.death@gmail.com

S. Vrath: Amazingly we’ve had three London bookings this year. February we supported Mortuary Drape, in May we’re playing with some UK bands night and then there’s the gig in August with Negative Plane, Lie In Ruins (another great album of the decade!) and Cruciamentum.

When can we expect a new full-length? Are you willing to divulge any details about its title, artwork, or themes?

A. Satyrus: We’ll release our second full-length album in 2012, more than likely through Invictus Productions. The tracks are being written as we speak. Can’t reveal anything else for now…

Is it still possible to get hold of ‘To Those Who Stand Against Us…’?

A. Satyrus: Yes. A number of distros including Hell’s Headbangers, Blood Harvest, Todestrieb, Necroterror Records and Invictus Productions still carry the CD. A gatefold LP is now in production via Blood Harvest. You can also purchase a copy via the band.

A. Satyrus: We’re proud to announce that Scythian has recruited a fifth member. Byron Braidwood (aka B. Iron), lead guitarist of UK death metal band Spearhead joined our ranks in February as our second axe. S. Vrath will take on full vocal duties but continue to compose.

S. Vrath: Thanks for the interview! Keep on lurking! We got some brand new patches and pins available, so get in touch! scythian.death@gmail.com