Chris Grigg’s letter to Hunter Hunt-Hendrix offers a satisfying and provocative read. It focuses on the arrogant persona the Liturgy frontman has made for himself, and though packaged as a piece of friendly advice, was clearly born of the same sense of repulsion shared by many metalheads towards the guy’s posturing and self-importance. Chris really hits the nail on the head, and his letter reveals – in a much clearer way than I ever could – why a metal fan like me finds it so hard to approach Liturgy’s music with equanimity, without hating it before you’ve even heard it. As much as I agreed with it, the letter also stirred me to defend some of the more admirable aspects to the band’s approach. Don’t worry: in what follows, I won’t be proclaiming Liturgy as the great new hopes of metal – not even fucking close – but despite all their off-putting antics, there’s something about Liturgy that wins my respect more than 90% of the old-school revivalist bands. Nor is what follows just about Liturgy: there are much more important and exciting bands that take the same approach to creativity, the only approach, as far as I can see, that can guarantee the survival or metal as a force to be reckoned with.

Whatever your genre, if you want to write an innovative record  (or at least one that sets you apart from the main trends of the day), you’ve got three options, as far as I can see:

(1) Resurrect a style of music that once had some currency, but has been dead for a while. Many bands have made a name for themselves over the last few years as part of the old-school death revival. Like a lot of you, I’ve enjoyed a load of these bands, particularly those who combine their traditionalism with a knack for penning memorable songs (like Cruciamentum). But setting aside those bands that are letting their sounds evolve, I’m growing less and less sympathetic to this stuff. Sometimes I dig out all the records I used to love as a kid, and for about a week I’m totally convinced that every one is an unappreciated masterpiece. Then it wears off. Old school revivals are destined to the same fate. Sure, you can keep recycling the long list of forgotten subgenres, but unless you can come up with some unforgettable tunes, it won’t be long before you’re consigned to obscurity along with the rest of your scene.

(2) Combine your preferred style of music with features of another genre. Psychedelic rock, post rock, shoegaze, and now krautrock have all been pounced upon by prospective metal musicians hoping to deliver something fresh. Sometimes, a band will come along who live and breathe all of the kinds of music they have chosen (or better, just happened) to combine. Then the result is totally natural and convincing (Hateful Abandon and Terzij de Horde spring to mind). But the vast majority of projects are doomed to an artificial sound, or to be branded as rip-offs. Besides, what could be more definitive of ‘hipster’ music than irresponsibly co-opting features from a genre that you haven’t properly engaged with?

(3) Thinking long and hard about what you take to be the advantages and problems in the music you listen to, and writing a record that lives up to the former while trying to fix the latter. Now, any band that does this thoughtfully is guaranteed to win my respect, even if I can’t stand the result. This is the essence of rebellion in music, and what gave metal its voice in the first place. Some records are great because they manage to perfect a pre-existing art form, but nothing beats a conscious revolt. Burzum is a great example, and has proved to be one of the most influential artists in the last two decades of metal. Having grown sick of Death Metal’s constant rhythm-changes and lack of natural progression within songs, Varg crafted a form of metal that placed a higher value on repetition and gradual development. True, he may have been inspired to do so by his love of techno and house music (he claims that as a teenager he used to lurk in the back of clubs, totally sober, just listening to the dance tunes), but Burzum is about as far away from being a house/metal crossover as you can get. It came out of a thoughtful examination of what he liked and disliked in music, regardless of its genre.

As stomach-churning as it is, Hunt-Hendrix’ “manifesto” reveals exactly the same kind of concerns. Once you scrape off all the bullshit and unnecessary deprecation of BM, you’re left with a pretty clear vision: he feels that unvaried bast-beats are too static, he thinks the upper registers of the guitar are wrongly neglected, and likes triumphant-sounding melodies. Fair enough. But I’d have approached his music with a much more generous mind if he’d said so in as many words, and without shitting on the music I love. The other embarassing thing about the manifesto is his hijacking of the word ‘transcendental’. There’s a lot that I enjoy in Liturgy’s music, but the one thing it’s not is transcendental. Completely to the contrary of what Hunt-Hendrix claims, one of the real appeals of genuine black metal is that it really is transcendental. It takes you outside of your mundane surroundings. The more you let your metal sound like spazzy, Three One G hardcore, the less it’s going to do that for me. 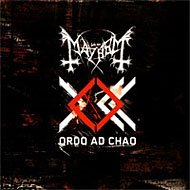 There’s a more tactful way of achieving (3), and that’s quietly getting on with it and (sorry for the cliché) letting the music speak for itself. Look at Mayhem’s Ordo ad Chao, or Deathspell Omega’s Fas. They too eschewed repetitious drumming and conventional approaches to the guitar while hanging on to the most potent aspects of Black Metal. These are two of my favourite records from the last decade. Neither came bundled with a pamphlet about how it was the future of metal and ever-so-jolly-fucking-clever. If it had, I’d have struggled – to say the least – to give it a fair shot.

Everyone loves Burzum but hates Liturgy. Why? Varg has embarassed himself on far more occasions by writing equally obnoxious and self-glorifying rubbish. How has he got away with it? Perhaps he managed to give his music a sense of mystery that distances it from the man himself. There is no such mystery, unfortunately, to come to the aid of Hunt-Hendrix, who has made too much of a public figure of himself to let listeners separate the music from the musician. His face pops distractingly into my head when I hear those high screams. When I hear the high screams of ‘Det Som En Gang Var’, it’s cold, dusk-lit fields that come to mind, not the irritating persona of its creator. If Hunt-Hendrix wants his music to be truly transcendental, he needs to find a way to cut the listener off from the real-life figure of the artist, with all its flaws and pretences.