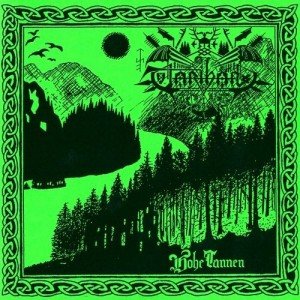 Today I bring before you one of the stranger items in my collection, the sole album released by the Swiss Tarihan. One way or another this has come to be one of my favourite records, one that I’ve listened to every few months for the last four or five years. That green cover actually does a good job of summing up the music itself: nature-based Germanic metal, grandiose in conception and charmingly amateur in execution. I say amateur not as a criticism of the musicianship, but because Hohe Tannen is plainly a labour of love: its recording (definitely a home job) spanned two decades, and I suspect much of the composition did, too. The songs feel as if they’ve been recrafted and touched up a hundred times between their embryonic form in the ’90s and the final recording. Some of the greatest albums ever made were the result of years of perfection (De Mysteriis Dom. Sathanas springs to mind), and on Hohe Tannen the years of work have certainly paid off. The albums four main tracks, all 9-13 minutes long, glide seamlessly from scene to scene through long series of riffs. There’s a strong Wagnerian presence here, and I think Tarihan has tried to pull off Wagner’s own ideal of the unending melody: the backbone of every riff is a great tune, sounding equal parts metallic, folky and classical. The melodies are surprisingly memorable, too, and far outstrip the like-minded projects Woodtemple and Graveland in this respect. Give this a couple of spins if you have time (it’s amazing how much you remember the second time round):

What amazes me most about Hohe Tannen, though, is the sheer ambitiousness of the record. It takes a lot of risks, especially with the structure. The album opens with the four-minute ‘Walkürensturm’ (‘Storm of Valkyries’), a slightly baffling intro consisting of the prelude to Act 2 of The Valkyries and the sounds of a storm played on top. That’s really all there is to it; and while it sounds like a bit of a cop-out, amazingly it works to set the tone of this bombastic piece of Wagnolatry. The meat of the album – four long songs – is divided into two halves by the curious rabbit-hole that is the album’s middle. Over five short tracks (1-2 minutes each), Tarihan explores the ‘folkier’ side with some instrumental pieces and metal adaptations of several bits of Volkstümliche Musik,including the title track, an amusingly bombastic reinterpretation of ‘Hohe Tannen’. Here’s the terrifying German Heino delivering a more faithful rendition (ready yourself for hilarity):

At the very least, you have to respect someone who can successfully work that into an extreme metal album.

We then start to climb out of the rabbit-hole with the next longer song and two covers, one of Absurd and one of the Graveland favourite ‘The Dark Battlefield’, lovingly translated into German (‘Das dunkle Schlachtfeld’). Both, though different, work very well with the Tarihan style and add a further dimension of quirkiness to the album. More surprises await, however, in the last of the four longer songs, which features, among other things, a garnishing of zither-work.

No one’s going to pretend this is a perfect album. Every now and then the drums fall out of sync with the rest of the music, and the ridiculously histrionic clean vocals often get a little off-key. But Tarihan’s compositional skills more than make up for it, and the guitar and bass arrangements are way more complex than your usual solo-project fare. Above all, though, Hohe Tannen is a work of character, and with the same eccentric spirit imbued throughout this wildly diverse music, this ambitious project possesses a real consistency. But what more could we expect from a man calling himself Herr Targaz Ansgizel von Tannenburg, and looking like this?