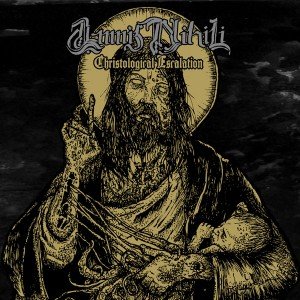 Amnis Nihili want to cause you serious bodily harm and, yes, this is one of LURKER’s foremost precepts when it comes to fresh black metal talent from the deepest bowels of the underground. We already have a winner here. Bar one ear-shattering passage of meditative ambience, the Greek trio’s first statement, Christological Escalation, rarely loses grip on the blistering, malevolent sprawl that defines this EP.

Right from the opening moments the listener is affronted by a flurry of sharp and melodic riffs, and it soon becomes apparent that this release is rooted in the grand old tradition. Fucking yes. The title track vaguely hearkens back to Dissection at times but with the gothic romanticism buried beneath a powerful modern twist, which manifests itself in very healthy nods to mid-era Deathspell, Watain and Antaeus as the piece unfolds.

But lame name-dropping isn’t to say Amnis Nihili aren’t forging their own path. Hot on the heels of these references to great and timeless acts follows an EP that’s as bold as it is uncompromising. The arctic howl of the guitars on ‘Wandering Amongst Ruins And Ash’ is almost blotted out by an imposing and disciplined percussion section reeling off deafening blast beats throughout. The chaos borders on the indecipherable but it’s breathtaking, and quite at home among the more experimental ranks of black and death metal.

Shifting gear, the violent cacophony ebbs away within the twisting atmospherics of ‘Radiation’, a gentle but feedback-drenched drone that offers a much-needed halfway house amid such unfettered aggression. It’s good to have a breather because what follows is the record’s most bludgeoning and hideous track. ‘Infamous Judeochristian Seed’ appears to rear in revulsion at the song’s subject matter, charging ever further into the realms of foul, lurching, technical death metal.

But what really gives Christological Escalation its venom is the exhausting vocal performance, brought to you by the same maniac behind another LURKER-approved outfit, the “astrogrind” conspirators Dephosphorus. This band is also no stranger to the arcane subtleties of black metal, yet Panos’s delivery for Amnis Nihili remains grindcore through and through, adding extra punk bite and urgency to these four already scathing songs. Slices of spoken word are also littered across the EP, esoteric and spiritual in their context and tying in nicely with the odious cover art, etched by the inimitable Viral Graphics.

Feral, vicious and relentless – but also honed down to the finest details – Amnis Nihili’s first offering promises much more greatness to come. The MCD is available now as a very worthy addition to Avantgarde Music’s brilliant roster and a 10” vinyl edition is in the pipeline.