We hold swords toward each others’ throats 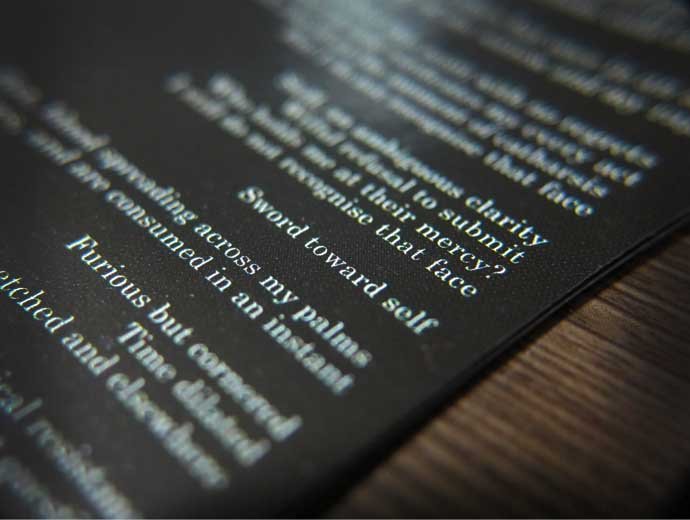 Combine the belligerence and hate of war metal, the technical proficiency of oft-unlistenable technical death metal and a penchant for melody that only the greatest of thrash metal acts possess, and you are beginning to arrive in Sword Toward Self’s ballpark. Granted, Dissolution Mantras is a beast of an EP, clocking in at less than 20 minutes and delivering more punch, riffs and attitude than the majority of their competitors. Be it acoustic interludes, fragile vocal arrangements, unrelenting drums or continuously summoning in me the need to describe their music as “epic” – Sword Toward Self traverse an incredible amount of musical heritage in this, their one and only release.

The music could be described as a more progressive Axis of Advance. The blasting tides of colossal riffs attack from every direction; an inimitable drum performance and vocal delivery top it off. Lyrically and thematically, they are much closer to Sacramentary Abolishment, combining razor-like precision to their aggression with a medieval aura. The sheer scale of ideas presented within these three tracks is ridiculous. One moment you are in battle, warfare all around and the battering-ram drums drive you onward. The next second, a soaring lead guitar reveals the pure fucking majesty that surrounds the battlefield. Mountains tower. Endless forests. Bodies piled up. All of this before we even approach the slow, doomy tendencies of closing track ‘Iridescent Wings of the Ungods’ or the impromptu folk meanderings that permeate the veil of the self-titled track.

War metal is hardly the most inventive or forward-thinking genre in the annals of musical exploration and save a few bands, like Axis of Advance, you’d be forgiven for thinking it was all the same relentless barrage on the higher cognitive functions (note: this can be a great thing. Sometimes a primal calling is all I need to spin VICTORY.INTOLERANCE.MASTERY. on repeat). Sword Toward Self have managed to inject some much-needed venom into their work and the result is something every lurker needs to bear witness to. Behold the glory that is the self-titled track and the monster riff that greets you at 0:55 (stream from the band’s dated Myspace). Featuring Dan Nahum and Henry Lauer of Greed & Rapacity – a shame that such a talented act has been forced to call it a day. Onward to glory, however, as the future is looking bright for this duo. ATTACK! Get this (at a very reasonable price) from Tactical Solutions.