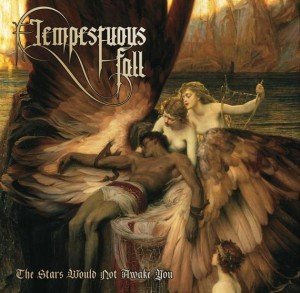 A common pitfall of performing in a style closely linked to a specific time and place is that an overwhelming proportion of contemporary bands do their best to sound exactly like those sub-sub-sub-genre founders. But not Dis Pater, a wretched hermit from Brisbane, Australia, who busies himself with a number of solo projects all vaguely floating among the realms of extreme metal. His fantastic double album Funerals From The Astral Sphere, which was released last year under the Midnight Odyssey moniker, did much to shift the boundaries of black metal with its emphasis on sweeping atmospheres over the usual irreverent Norsecore. Now this visionary composer has turned his hand to funeral doom, similarly a movement plagued by acts who just want to be Thergothon. As might be expected, his interpretation sounds little like the uninspired thralls that still diligently ape their masters.

Adopting the guise of Tempestuous Fall, this first release, The Stars Would Not Awake You, is easily identifiable as doom metal of the most gloomy, dismal shade. The riffs are deep, droning and enormous, with familiar harmony-laden guitar lines creeping in here and there, all dragged onwards by spacious, reverberant drumming. But what really makes the album stand out is its cosmic production. Dis Pater has already proven himself to be a studio wizard, drenching previous records with an otherworldly shimmer that sends the listener on a graceful plummet through space and time. Ranging from ornate synth hums to an entire electronic orchestra, this symphonic element to Dis Pater’s palette returns with a vengeance in Tempestuous Fall, and perhaps plays an even more important role here than in his mainstay project.

Guitars, although disgustingly heavy and distorted, are rolled back in the mix to morosely plod along, making way for eerie synthesisers to float into the fore bearing their strangely moving melodies. This interaction between traditional instruments and celestial ambience is a true triumph of The Stars… but none of it could be achieved without Dis Pater’s knack for enchanting songcraft. It first hits home on the opening track ‘Old & Grey’ when, after trawling through a lachrymose string introduction and pitch-perfect death growls, a quaking clean voice rises out of the miasma. From that point on, the album just takes off on a crushing wave of emotion.

It’s strange, though. Lurker usually turns to funeral doom to perpetuate its melancholy when it seems all is lost, which is often. Yet never before has the style sounded so fucking uplifting. Each song sighs with resignation as it ponders the pain of existence, only to later fall upon a megalithic riff that simply whispers: “Dwell not in darkness! Arise and conquer!” OK, so not everyone will hear that, but fine examples include the hook on ‘Marble Tears’, which tugs the heartstrings to the point of threatening to tear them out and sends this lurker into a fit of tar-pit headbanging. Then there’s the closing piece, ‘A Cold Stale Goodbye’, where one of the best doom riffs ever summoned shatters the song’s sorrowful narrative, led by a soaring violin.

The Stars Would Not Awake You is the kind of album that makes you debate its finest track over and over. There are five of them, all smashing through the ten-minute mark, but all offering something unique that lurkers will return for again and again. In other words, it’s unmissable. Real funeral doom for 2012. Order from the quality Italian label I, Voidhanger.