This is the first of several posts on some of the best, and often criminally ignored, black metal bands to come out of the UK. Many are still active, some are not, but every one deserves a lot more attention. This isn’t about “supporting the national scene”, or anything unreasonably posi like that. It’s about paying fealty to great artistic creations. The best British Black Metal is isolationist music, created by and for the solitary, with little to no input from others in the “scene”. These posts will be a celebration of that anchoritic spirit, and the close bond it often has with the landscape and eccentricities of these islands. 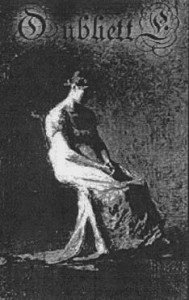 Oubliette was a short-lived Cornish band that put out just a couple of demos in 2005-2006. On one level, the music is very much a product of its age, leaning towards the “depressive” style of Black Metal that was so prevalent back then. But unlike much of that period’s output, which in retrospect was often just cringeworthy post-rock cluttered by the wheezings of life-denying manlets, Oubliette has aged excellently. In a time that had forgotten the importance of actual riffs, Oubliette’s songs focus on forceful, driving guitar work while still delivering the melancholic melodicism and consonance so definitive of that period. There’s a lot in common here with Xasthur’s less atonal offerings, but the better point of comparison may be demo-era Peste Noire, when the band was still fending off accusations of being part of the DSBM fad.

Both demos, Oubliette and Nadezda, stand out for their iconic guitar tone, a lightly distorted echoing that gives the compositions a feel of being performed in a cathedral. Drums are programmed but mixed in a way that avoids distraction. The reliance on blasting and swinging Bathorian rhythms certainly sets Oubliette apart from other projects of its ilk and gives it a much-needed backbone.

All this is by the by, however. What really makes Oubliette so brilliant is its genuine power to conjure a reflective sense of melancholy in the listener. I know that most sycophantic reviews of this kind of music make that claim, but how often have you really agreed? It’s one thing for a band to let its listeners know how miserable they are, but a much greater challenge to do what Oubliette does: to create its own lugubrious world of sound and invite the listener in to explore it.