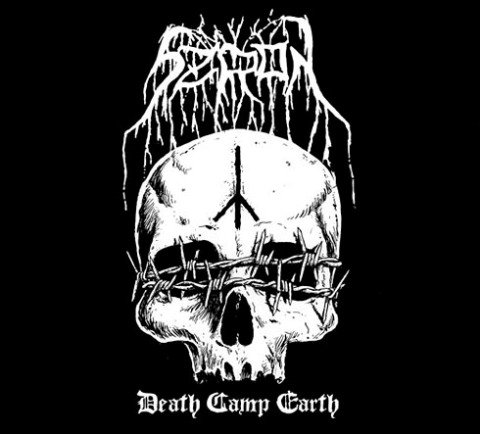 Death Camp Earth is orthodox black metal. The sound is quintessentially of northern European origin and the schema is one of hate and disgust for humanity and all its constructs. What separates Szron then, from the gaping maw of uninspired traditionalists? The same thing that makes this year’s Kaevum and Mgła releases repeat plays: conviction and consistency.

Szron have been pumping out austere, anti-humanistic black metal hatred on cassette and CD since the turn of the millennium. In true Polish fashion, they follow the orthodox template down to the last notch on the rope around the throat of Christ. Their last full length, Zeal, put the repetitive, melodic riffing style of Scandinavian orthodoxy (think Presence era Mgła) at the forefront of their sound. Death Camp Earth continues in this vein and sees the band trade in the lo-fi production and chord-focused riffs of 2004’s ‘The Purificating Flame of Annihilation’ for more dynamics, melodies and contempt.

This is no bad thing either. More akin to their first demo, where melody and conviction triumphed over sheer unease and chaos, this release sees the Polish act in their element: inspired and full of vigor. The title track reveals a proclivity for post-prison Burzum without ever falling into the heavily melodic territory of Fallen or Umskiptar (is it just coincidence that the intro to the title track sounds like a more voracious Glemselens Elv?). Indeed, the whole album is fast, unrelenting and meant as a banner of hate and disgust.

Fans of the traditional Scandinavian sound akin to Kaevum and Veles should dedicate some of their time to Szron, who have always delivered over the last 11 years. The CD is available now from Under the Sign of Garazel Productions. Listen to the title track below.