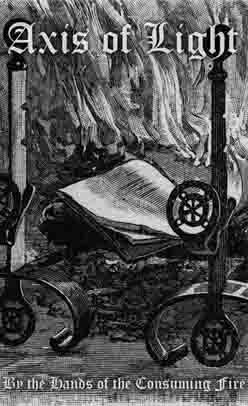 A chaotic vortex of buzzsaw riffs, primitive production and pure misanthrophy mark the opening to Axis of Light’s phenomenal demo, By the Hands of the Consuming Fire, a work utterly contaminated by the decaying filth of modern human existence.

Hailing from Manchester, this two-piece has strong roots in the wider UK metal scene, being associated with the supremely underrated Desolate Winds and Somne. Pedigree is no indicator of direction here, though, with a great alchemical undercurrent running throughout these four untitled tracks that somehow manages to turn hateful, wall-of-sound pandemonium into an exceptionally melodic affair.

There are major riffs here, lurking just beneath the surface of dissonance. It’s very easy for a band so entrenched in the sort of gritty tones that Axis of Light peddle to sacrifice any sense of songcraft upon the altar of atmosphere, but here the rage and salvation are intertwined, with each element creating a scathing yet graceful invective.

This is one of the best releases of the year and absolutely essential for anyone with a taste for expertly crafted and superior-order black metal. Axis of Light are the death rattle of a terminal world, the last desperate cry at the end of history – and they deserve your immediate attention. The cassette has long been sold out, but seek it you must! In the meantime, grab a shirt here and await news of their forthcoming split with Death Fortress.