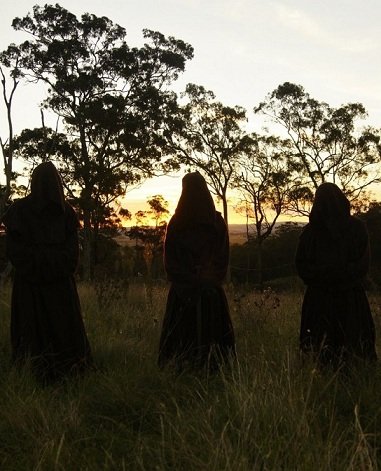 Ever since non-Scandinavian strains of black metal gathered momentum (read: stopped sucking) in the early 00s, the hacks have made a point of using location as a “selling” point for what is genuinely a preternatural art form. It’s a feeling, a gnosis, a mystical essence that exists independently. One able to leap continents and cultures, revealing its true form only to those worthy of wielding it righteously. Of course, the style’s spiritual home is Newcastle upon Tyne anyway, and LURKER holds that if it sounds too closely linked to a specific place or the activities of other mortals therein… Well, that just ain’t black metal (looking at you, vast proportion of USBM).

Cue an adventurous young band called Crowned who, although hailing from the arid expanse of Australia, have managed to tap directly into the source. Leaning towards Romantic notions of human experience rather than petitioning our lord Satan for inspiration, their debut album Vacuous Spectral Silence effectively summons ancestral memories of mist-shrouded sylvan realms, snow-capped mountain peaks and the aura of a world forever lost to modern man. In this respect, easy comparisons could be made to such heavy-hitters as Wolves In The Throne Room or Drudkh, but in reality Crowned compose much more interesting, dynamic music than both and certainly tower above the bland farce that the latter have fallen into recently. A loss perhaps, but it is heartening to know this Antipodean three-piece have stepped up so as to claim their crown (no pun intended, but fuck that’s convenient). 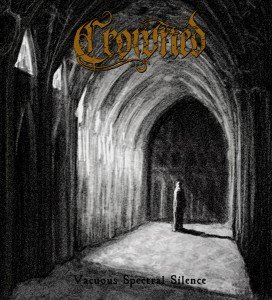 A unique approach can be swiftly divined within the record’s opening moments. Cascading chimes of a clean guitar set the scene for first track ‘Menelvagor’, what the elves call the constellation of Orien in Tolkien’s The Silmarillion, its strange folk-like repetitions assuredly transfixing the listener on what is to follow. When the rattling drums and amorphous rhythm guitars smash into the fold, that lead still shimmers brightly, illuminating the twisted mass below to give shape and definition to a series of grand orchestral melodies.

At times they are slow, graceful and sweeping; at others frantic, violent and dripping with contempt – but throughout Crowned deliver with a sort of cack-handed, youthful exuberance so reminiscent of early Burzum, and an enthusiasm for the music sorely lacking these days in many of black metal’s more storied acts. Droning Gregorian-esque synthesizers haunt the more airy sections and strangled howls ride atop, sometimes coupled with booming spoken word to give added depth to the tales as they unfold. Blast beats are used sparingly, surfacing only to provide punishing punctuation to these six epic narratives, with the drummer instead favouring rhythmic intricacy, relentlessly toying with the hi-hats and cymbals among driving strikes of the snare.

But these elements are all pushed to their extremes in the final chapter and title track, during which guitars are discordantly ravaged and the percussion simply never lets up, while fell male and female voices, a spectral choir, glide along in the background. Working in unison, they whip the 14-minute piece into a hypnotic frenzy that is near impossible to escape. Vacuous Spectral Silence is a great first effort from a fresh-faced act brimming with potential and a sinister “grower” that offers more with each spin. LURKER greatly anticipates more material. Devotees of black metal’s bleak Romantic streak will not be disappointed. Grab yours from Séance Records.