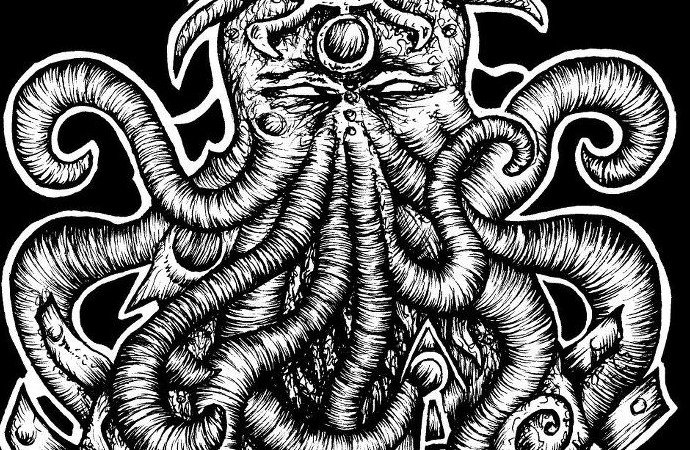 The Great Old Ones synthesized some top tier Lovecraft influenced extreme metal earlier this year on Al Azif, their debut album, steering the great writer’s influence in a direction nobody really expected with their heady melodies and brazen skill. Part of my appreciation for the bands ambiance was due to the artwork that accompanied the finished product (which can only fully be appreciated on the deluxe, recently released 2xLP version). Psychedelic tones, serpentine shapes and a purposely intangible subject matter pay homage to Lovecraft’s treatment of infinity and the abyss.

The artist in question, Jeff Grimal, happens to play guitar in The Great Old Ones. His work, be it oil painting or black and white drawing, is heavily influenced by the father of modern horror. His paintings range from disquieting caricatures of  horrors glimpsed beyond the veil to highly detailed and ornately adorned representations of everyday creatures. He recently completed a poster for our upcoming concert and is currently preparing for his next exhibition. We asked him a little about his work and his influence. 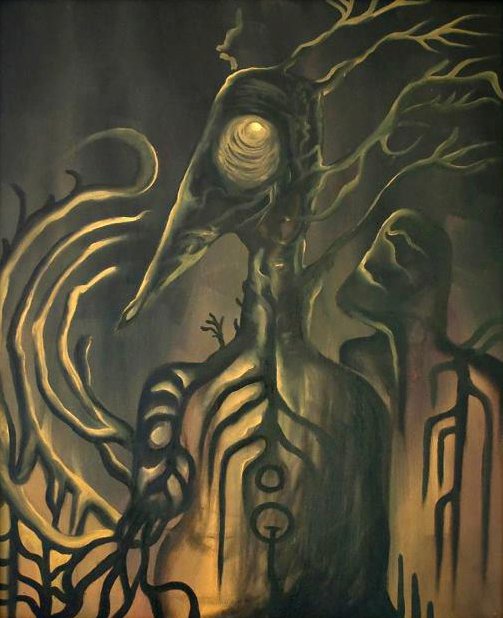 “Painting called ‘The Guardian’ made while listening to doom music. Doom is a very efficient medium for painting disturbing characters.”

Let’s talk influences. Why the obsession with Lovecraft?

I started discovering Lovecraft during my teenage years. His story, “The case of Charles Dexter Ward”, is for me one of his best novels. I immediately fell in love the dark & occult talk of wizardry and necromancy. So I continued to read all of his work. I do not have an obsession with him; I’d rather say that that I have always had an admiration for him and his ideas. I take influence from several other writers in this fantastic genre like Poe, Simmons and Barker but also in other styles (K Dick, Bukowski, Burroughs, etc …)

He’s long been worshipped like a God in underground circles. It’s rare that an artist influences other artists beyond their own medium. Lovecraft has provided ample inspiration to writers, musicians and visual artists alike. Why do you think this is?

His work is so detailed that it is no wonder other artists are influenced by him. There are tons of things to do or to say about his work. I personally can’t wait to watch a good movie about Lovecraft’s work. At the moment, in my opinion no director has managed to capture the essence of his work and make it his own. Maybe the “Evil Dead” series, with all the delirium and chaos, has a few parallels with the Necronomicon. Visually though, Giger got the job done!

Care to explain your connection with his work?

I’ve always seen a color to his work, it’s very easy to me to feel the darkness surrounding his novels, it’s like changing dimension, or epoch. I picture myself sailing across the ocean and seeing the city of R’lyeh. 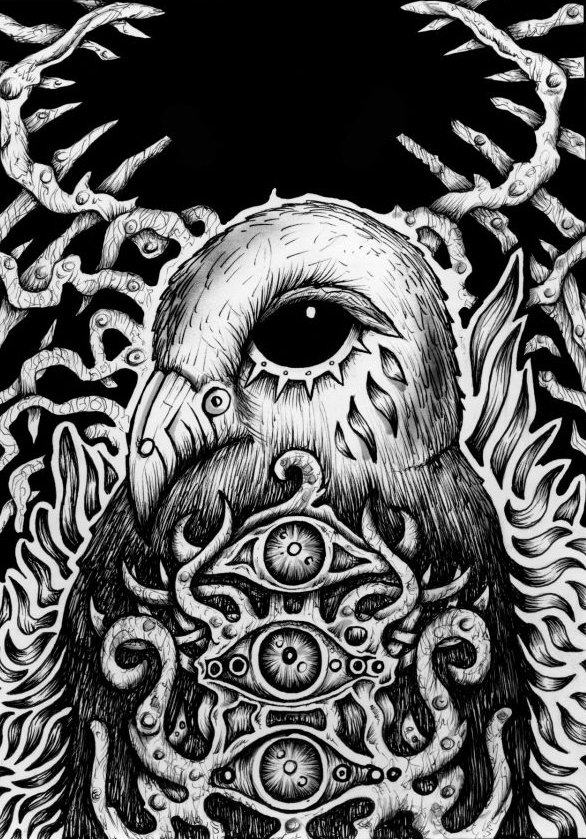 “This is the poster for the London TGOO/TdH gig from my series on birds.”

Putting the strong Lovecraft vibe aside, who or what else influences your style?

I’m influenced by a lots of artists, I work most of the time listening to some music, be it classical music (Bach, Sibelius, Strauss etc…) or extreme metal (doom, death metal). It puts me in a kind of trance. As for the visual arts, I love very different stuff, I appreciate some classically trained painters (Dali, Bruegel, de Latour) and modern ones like Giger, Grey, Beksinki and so on. Long is the list!

Your work seems split into distinct styles, painting and drawing, colour and greyscale (correct me if I’m wrong).

Yes, absolutely, I love working on different canvases. Black & white drawing is a longer and more precise work; painting is more of an instinct. Both work well together.

If you had to apply a self-description to your visual art, what might it be?

I define my work as “psychedelic”, forgot to mention that in the previous question. I like a lot Rock ‘n’ roll posters from the sixties & the seventies so there are some similarities between with my black and white pieces.

Are there any ties between your visual work and that of The Great Old Ones?

My style is the perfect fit for The Great Old Ones, even before being in the band, my work reflected this ambiance. I really enjoy working with them, there’s a perfect osmosis between our music and my
pictorial art.

Does your need to create manifest itself elsewhere, outside music and imagery?

Nope, I focus solely on these two artistic disciplines. 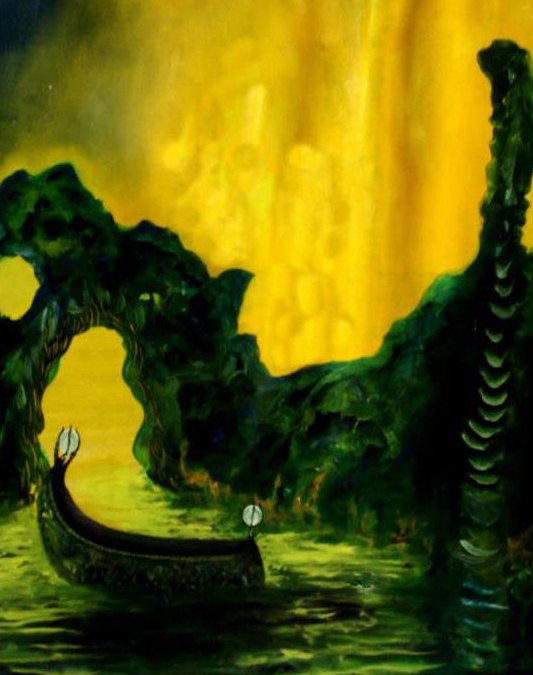 “This is one of my first oil paintings, simply titled ‘Passage’.”

Is most of your work personal projects or done for other bands and artists? Have you worked with anyone in the past and is there anyone in particular you’d like to work with?

Since I’m in the band, I make the album’s covers. I made a cover album and shirt design for a funk/rock band called Massada and also one for Cénesthésie (HxC prog). My only wish for the future is to work as many bands as possible

What are you currently working on and what do you have lined up?

Currently I am painting for my next exhibition, it will feature a portrait of Lovecraft. I’m also working on a series on birds (just like the poster for the London gig).

Any links, websites or bands you’d like to recommend?

A one man band L’Ocelle Mare and the last album of Evoken, Atra Mors.

You can view Jeff’s work and contact him on his Facebook page. Jeff’s band, The Great Old Ones, are touring the UK with Terzij de Horde in January despite the European tour falling through. For tour dates, album streams and merchandise head on over to their website. The 2xLP of Al Azif is available now from Antithetic Records.